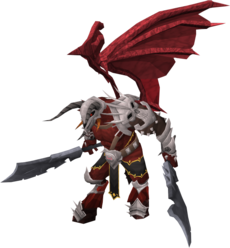 Heya, 04ismailjj6, and welcome to the RuneScape Wiki! I hope you have a good time, and to get you started, here are a few pages that you might find helpful:

Please, remember to sign your name on talk pages by using four tildes (~~~~) or use the "sign" button (

) above the edit box. This will automatically produce your name and the date. Signing your comments is important, as it lets other editors know who has posted which comments.

If you have any trouble or need help, feel free to ask questions on any editor's talk page.

While you're updating the redirects, you may as well make them point to the correct page name: 2013 Spring event. I moved it again to comply with the naming of other events.

If you ever find you can't move something to the correct name, for whatever reason, pop in [[Special:Chat]] or IRC and ask for an admin to help you; they can do the deletion-move that is probably necessary.

Without looking at Habblet's welcome coding, I wouldn't know. Maybe copy it into notepad or something to read it?

How exactly was this vandalism?

To get back to an old version of an article, go to its history and click the date of the version you want to restore. Then edit and save, and that old version will be the new version.

Ok thanks, Noted for the future :) I tried to undo it normally and it said there were conflicting edits. I guess that's cos the anonymous contributor re-added one of the trivia pieces fswe1 deleted.04ismailjj6 (talk) 22:00, June 2, 2013 (UTC)

Did you even try to fix the edit by that IP?

Could you try and explain it to me, because I don't see the symbol on any of the pictures. Also I think somethings might well be wrong, Bandos explicitly said Guthix was evil (I believe in a quest) and Juna changed her mind after TWW (like a true zealot) :P . . . Yours,

Do not do this. It's called edit warring. If there's an issue with an edit, take it to the article's talk page or the other contributor's talk page rather than just going back and forth.

I've pre-filled the templates to use, so you can copypaste one of these (dunno which you need though - do you remember which mod mentioned the Vorago) into the article then add {{reflist}} under the References heading. As for the previous ref, not only was poorly formatted (id est, without the use of any citing templates), it was an unarchived link, meaning it will be completely useless in a few weeks, since the thread will have been eaten by the page 51 monster. Always archive sources with http://webcitation.org. =3 User_talk:Fswe1 Fswe1

Eh? Works fine for me. Either way, error messages are fairly common (Bandos#References...), and we cannot do but wait for WebCite "staff" to fix it. =/ User_talk:Fswe1 Fswe1

Haha, no problem. And they're not "mine", I just archived them. ;) User_talk:Fswe1 Fswe1

Yep, 1 week is enough, per RS:SNOW. Also, I don't think there are enough solid arguments to preserve all trivia. All of the notable trivia either was on the seperate pages already, or could have been put there during the RfD. If it has not happened before, then it's not notable enough to be kept, per RS:TRIVIA. JOEYTJE50TALK pull my finger 16:35, June 28, 2013 (UTC)

Ok I've put the contents of the page on [[w:c:joeytje50:Cultural caeks]]. If you want, you can put the

They're teasers for the "Battle of Lumbridge" world event, as mentioned in the recent RuneScape 3 newspost. I had to name then something, so naming them after the content they're a teaser for

For all intents and purposes, it is blank. It would really be more appropriate to either wait for someone else to do it or wait until you can get the note yourself. I guess I can understand your thought process, but next time it might be better to create a sandbox in your userspace for this and when it's done move the contents to the mainspace. MolMan 15:39, July 5, 2013 (UTC)

I've created the page, but in the future, please don't use my talk page as your medium for posting what needs to be done. Next time, please go into the chat and link a pastebin of the code... MolMan 22:54, July 5, 2013 (UTC)

Looks like I stand corrected. NIS has received a content update at some point. Though I'm not sure until which one (pre-Toolbelt update at least). Import save still doesn't work, however. Lord I wish it got fixed before the release, I could test Goutweed and the new farming plants now O o! IP83.101.44.209 (talk) 18:36, July 12, 2013 (UTC)

Regarding this and following edits; there were patch notes today, so even if the build number didn't change, certain things were changed... I'd say, move those things back to today's date.. although, the first report of f2p getting cosmetic override parts was posted about 20-30 minutes before the topic of today's update... So that might still be Monday, ugh. IP83.101.44.209 (talk) 17:05, September 3, 2013 (UTC)

That's a unisex word. Like... parent. I (male) am a parent, my wife is a parent. But I'm also a father, while my wife is a mother. Although... parent stems from the latin word pater which also means father. So... although parent is unixsex now, it does have a male stem. Sexism in laguange goes a long way xD . . . Yours,

Then they are still rare items. The item pages should be move to be along the lines of "name (item)" and marked as rare items and new pages made for the effects. MolMan 20:54, September 4, 2013 (UTC)

I can add a section about the auras on the SGS page but why would there need to be a full-fledged section? All the auras are still loyalty-point-exclusive.

You don't need to link to the page you're already on.

He's doing maintenance to userboxes and categories, which means he needs to edit userpages to fix things.

I left that out of the main table for one reason: to stop people from adding the intermediate tasks after it. And don't say it wouldn't happen, because sod's law says it would.

I don't have a clue if it's still in-game haha, I thought it was a bit odd that they'd keep the rake handle but remove the others. Cheers for adding the template. Duffmaaan (talk) 09:30, September 8, 2013 (UTC)

Does this clarify it sufficiently to everyone's satisfaction?

Edit warring on the Super September article as was done here is not acceptable. When an addition to a page becomes disputed, you should take the argument to the talk page. Instead, you made 5 reverts within 2 hours. This is in blatant violation of the three-revert policy, and I have blocked you for a period of 1 day. Suppa chuppa Talk 21:50, September 9, 2013 (UTC)

Hi! I tried editing your talk page but apparently I can only edit mine as part of the block. I'm kinda confused.
The log you linked to only shows me reverting 2 edits over the last 24 hours, while RS:3RR states I have to make at least 4 reverts on a single page in a 24 hour period in order to break the rule.
As far as I'm aware this is my first time breaking the RS:3RR rule so it seems like a warning would be sufficient instead of taking action against my account especially since my edits were made in good faith. Am I missing something? 04ismailjj6 (talk) 15:50, September 10, 2013 (UTC)

RS:3RR only applies in the case of good faith edits. You can revert edits as many times as you want if they're made with foul or malicious intent. The reverts I'm referring to are: [1] [2] [3] [4] [5]. They do not need to be complete reverts with the undo or revert button as partial reverts are also included in the policy. Suppa chuppa Talk 15:54, September 10, 2013 (UTC)
Furthermore, the fact that this is your first time breaching this policy is reflected by the relatively short duration of the block, which will be lifted in in less than 6 hours. Suppa chuppa Talk 15:57, September 10, 2013 (UTC)

So, to be clear, If someone is adding incorrect information but think they're correct I can only undo or change their edits in any way 3 times before breaking the rule, but if they're adding incorrect information they know is incorrect I can undo or change their edits until they stop?
Also thanks for the clarification on the partial edits. I thought they only counted if they were whole undone edits done with the undo button. 04ismailjj6 (talk) 17:40, September 10, 2013 (UTC)

Yeah. The best course of action is to take the discussion to the article's talk page or the user's talk page if your revert is subsequently reverted. Suppa chuppa Talk 23:02, September 10, 2013 (UTC)

Learn the difference between "It" and "It's" and when to use them.

Look, can you just leave the tables as they are, instead of overcomplicating them with unnecessary coding? They're the same width and nothing is splitting onto two lines.

I'm not zoomed out (quite the opposite, in fact, as anything under 125% is too small for me to read) and I'm not viewing in editing mode. It is not split over two lines.

Years ago. It came out at the same time as the search feature.

Be more careful when adding stuff to them, mate.

See Talk:Super September, where we've been discussing the references, and it was suggested they should have a notes section.

In comparison to other articles in |Category:Nonexisting content| the individual |Dragon Riders| do not have any appearence of being intended as future content. In addition 4 of the five known Dragon Riders are known to have died in the |Last riders| and the last, |Hannibus| is only known to have survived into the begining of the third age. As all Dragon Riders came to Gielinor there is no chance of others existing still. All other pages in that category have some indication of Jagex doing some work on them or mentioning them in public comunication.DragonKillZ3 (talk) 20:35, October 31, 2013 (UTC)

Thanks for getting that. I couldn't have done all of it, since I'd already sent him off to Castle Drakan.