Hello, I'm Neutralino! This is a subatomic particle, which I chose as my name since I thought it sounded cool. There's no hidden or ulterior meaning to it. Honest.

I typically edit random stuff, like combat, NPCs, trivia, lore, typos, grammar, and generally making pages look better. I've always had a love for amusing trivia, so I add that whenever I find some. I usually kill bosses and slayer monsters when I'm logged in, so I fix up their articles, too. I believe historical notes are important, so I add how things used to be in their trivia sections, if notable enough. I also try to keep things up to date as new updates roll out and change them. Boring, but interesting work.

I first heard of the wiki in 2009, the same year I started playing RuneScape. Since the official website's Knowledge Base lacked some rather important information like the King Black Dragon's combat level, I had to Google (or Bing or Yahoo search; I forget) "king black dragon combat level", and guess what the first result was. I eventually decided to help contribute to the wiki since it had helped me so much with things like quests, training methods, and what the strength bonus of dragon claws were (it was 56, just in case you're wondering). I had three anonymous IPs for a few years before officially making this account.

In-game, I'm known as Final Boss Inque if you want to PM me for any reason (I can't think of one, though...)

Me being weird[edit | edit source] 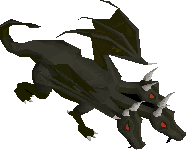 Shakorexis still thinks he's the strongest monster in the entire game and that his combat level of 276 sounds scary. Someone nice give him a wakeup call, please? Maybe his friend, the level 304 mithril dragon?

Dragon claws still think they can OHKO unsuspecting victims in the Wilderness when they're being rushed, preferably while they're having connection issues. What's sad is that Dragon claws are discarded for a weapon with better stats as soon as they're done slicing and dicing and that 50% adrenaline is wayyyy too pricey for any practical use. Someone please tell Dragon claws that they appreciate them even though they've been obsolete since 20 November, 2012, and that even before then, they were only ever equipped for a whole of four seconds.

Achievements and stuff that I've done in Gielinor.