My User Name Is Mjd1994 But My Real Name is Matthew. I'm From Porthcawl In wales And Am In Yeah 11.

My goal in Runescape Is to get all 99's And i am going for 99 Fletching as my first. I started my Runescape Adventure 4 years ago but stopped for a year but i have come back as a member and haven't looked back since. I haven't got a fortune but think its enough to get me to my levels and am hoping to get around 3m in the next week or so. My armor is full Rune pretty basic i know but i have full snake skin but i don't have the vambraces because a Revenant killed me in the Bounty Hunter :O How Lame. I like the new updates especially the Objectives Because it shows how long you have to get to a certain level in a skill.

Its going to be hard

Along way to go!

I'll do this easy! 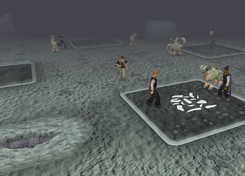 Steeling Creation Is one of my favorite Mini Games Because of the rewards Like the Morphic Tool Witch gives double the experience When using it. Stealing Creation or SC is a members-only minigame that was released on 11 November 2008. This minigame features an arena where skillers and player killers work together, creating equipment and trying to beat the opposition. The minigame itself gives no experience for any actions performed within it, instead granting points that can be exchanged for items that allow experience to be gained at an increased rate elsewhere. The goal of the minigame is to gain as many points as possible. This may involve harassing the other team. There are two teams, each signified by the colour of their cape, blue and red. In the end, the team with the most points wins, although winning or losing has only a small effect on the points; the winning team gets a 10% bonus. Players collect sacred clay, which is thought to be the "building blocks used by gods to create worlds" and then process it into various items. The end products can then be used or deposited at the base for points. Players can get together with clans, or play with a group of unrelated people. This minigame benefits players of all types, including normal players, pures, tankers, etc. While it is available to all members, higher levelled players have a definite advantage. The official worlds for Stealing Creation are 158 and 164. The unofficial non-PK world is 6. Please note this is a Safe minigame. Players are not allowed to bring any items into the minigame.

I never did Pking Before but have got into the hang of it. And the Rewards weren't so bad too :)

Originally, after the release of RuneScape Classic, players could select whether or not to play as player killer characters. Players could switch from player-killer mode to non-player-killer mode (in which the character could not attack or be attacked by other players) three times, after which they remained at their chosen setting forever. PvP combat could take place at most locations in the RuneScape world. The rules of combat were the same as in modern RuneScape Classic Wilderness. Lumbridge was designated as a neutral area in which players could not attack each other; this was done to prevent a practice called "spawn camping", in which recently killed players were immediately killed again as soon as they respawned. In addition to this restriction, NPC Guards and White Knights patrolled the cities of Varrock and Falador, breaking up PvP battles by attacking the aggressor. These guard units were limited in number, however, and if all the units in a city were already in combat, PvP combat could go on freely. On 13 August 2001, this system was replaced by the Wilderness, partly due to complaints from many players who were unable to leave Lumbridge without being attacked by hordes of hostile player killers. Later, additional areas where PvP combat is allowed were added. On 10 December 2007, Jagex made a highly controversial update that made pking in the wilderness only possible at the Bounty Hunter, which is unsafe, and Clan Wars, a safe minigame. Fist of Guthix, also safe, was not added until about four months after these updates. RuneScape lost about 6%[1] of its paying players within the following month, although more long-term statistics have never been released. No known amount of lost free players is known, however it is possible it was more than the number of quitting members. The exact numerical makeup of quitters (bots versus legitimate players) is uncertain. Many of the quitters were PKers, while others were the leaving accounts of autoers. According to Jagex, almost all the lost players since the 10 December update have been replaced by new subscribers. It is still very common to find players on the forums ranting.

Stealing Creation is a game that allows almost every single combat skill. The whole area is multi combat, but you cannot bring any of your own items into the game. You make PVP items such as bows, Melee Weapons, And Magic runes and staffs.

Soul Wars is a Slayer minigame that was released on 10 February 2009. It involves a team of players fighting another team to collect the most Soul Fragments and destroy each other's avatars. The only items that are not allowed are capes, food and non combat items. There are no requirements although high Combat and Slayer is recommended.

Bounty Hunter was a dangerous minigame that was introduced into the Wilderness on 10 December 2007, and removed for the new Bounty Worlds. This game allowed players of three categories to fight off in a free for all to the death to obtain each others' items. The Level categories were 3-55 (low) , 50-95 (med), 95+ (high). This was the only method of PKing that allowed you to obtain another player's items as a reward for killing them after wilderness was not PVP. However, any player attempting to pick up items not belonging to his or her target would have incurred a penalty, preventing them from leaving the arena for a certain period. When originally released, the Bounty Hunter arena was a multicombat zone. The Minigame was later changed to a single-way combat zone because of the number of clans which picked off solo PKers. However, under certain conditions it is possible to be engaged by multiple players. This Minigame only allows players to bring combat related items. This minigame is currently a new version of bounty hunter in which it acts like the old wilderness. But its limitations start from edgeville and end in the deep wilderness meaning you can't get out of edgeville or wilderness. Items the other person has are no longer their items but the equivalent of a monster drop like in PVP.

This is a minigame that was introduced into the Wilderness on 10 December 2007. This game allows two clans to fight off in an enclosed location. There are also free-for-all arenas. Players may bring whatever items they wish into this minigame. Only in one of the free-for-all arenas are players allowed to lose items, and in a special selection on the normal clan wars. There is no limit to the amount of clan members. 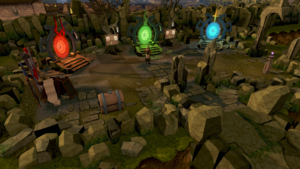 Killing other players in Castle Wars is technically only a secondary objective to getting the enemy flag; however, many players fight amongst themselves with no regard to the team objective. Castle Wars can only be accessed by members, and is highly populated in world 24.

On 15 October 2008, Jagex re-instated map-wide PKing on designated PvP worlds, although many aspects have been altered.