From the RuneScape Wiki, the wiki for all things RuneScape
< User:Leevclarke
Jump to navigation Jump to search

Max Bulldog, known to the Fremenniks as Jikton, and unofficially titled as Lord Kelda of Rimmington (see below) is leevclarke's in-game character, and is usually found running around UK servers. His vision is equally good in both eyes, though he is rarely without an eye patch over his right eye (except when wearing a helm or other headwear, of course).

Max's clan is named "Druimeanach" (which is the modern Scottish Gaelic word for leevclarke's real-life ancestral clan, Clan Drummond), but he is more likely to be found in the wiki clan chat, R S Wikia.

The name came from an empty can of Pepsi Max that happened to be on leevclarke's computer desk at the time, and the fact that he is a patriot of his country - the Bulldog being a symbol of Britishness. Max was not modelled on Andy Parsons or Keith Jardine (with the bald head and facial hair in the correct colour), he just happened to turn out that way.

Note that Max does not appreciate being nicknamed "Max Bullshit" or "Max Ballbag". Anyone who considers addressing him as such is referred to the following limerick:

Having completed Gertrude's Cat, Max's first pet was a black and white kitten who never even had a name. Unfortunately, Max was too busy killing chickens at Fred the Farmer's farm north of Lumbridge to feed the kitten properly, and he ran away.  :'(

Max's second cat was white, and was unofficially named Casper. Casper survived to adulthood, but Max decided on a whim to sell him for one hundred death runes in West Ardougne.

Max's next pet was a pet fish. The fish has never had a name, and spent most of his time in the bank before Jagex added the menagerie. The fish now has a happy home in Max's house.

After the Summoning update of the 15 January 2008, Max promptly completed the Wolf Whistle quest and then bought a bulldog puppy from the pet shop in Yanille on the same day.

After eating quite a few pieces of raw meat (for which many cows at the farm north of Lumbridge valiantly but unwillingly sacrificed their lives), the puppy finally grew up into a bulldog on the 18 January 2008. Max called him Bully.

Tragically, Bully ran away on the 25 January 2008 because Max failed to feed him enough.  :-( Max will never forget him...

On the 24 May 2008, Max bought another kitten from Gertrude. This time, he had the activated ring of charos, and chose a kitty that he unofficially named "Evans". Why? Because he is named after Chris Evans, who is also white and ginger. Evans has been a wise and faithful companion, and accompanied Max through Icthlarin's Little Helper and A Tail of Two Cats. Evans has since become an overgrown cat, but is much-loved. 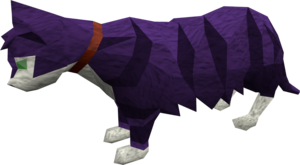 Evans is now a purple cat.

On the 30 October 2008, Evans became a purple cat, and later the same day he became a lazy cat. Max thinks that Evans has earned the right to be a lazy cat, after all that he has been through.

On the 30 May 2008, Max bought yet another kitten from Gertrude and unofficially named him Jonesy, after the cat from Alien.

On the 4 June 2008, Jonesy became a hell-kitten (and subsequently a hellcat) whilst helping Max to complete Evil Dave's part of Recipe for Disaster.

The very next day (the 5 June 2008), Jonesy caught his 100th rat, and Gertrude kindly awarded Max with a cat training medal.

With Jonesy's help, Max went on to complete Ratcatchers on the same day.

In the early hours of 28 March 2009, Max was passed by a chicken conga line. This was not a set-up (or if it was then Max was not in on it), there just happened to be a line of eight people in chicken sets, each following the one in front of them. They passed Max when he was in the bank in Draynor Village, and he followed them east through Lumbridge, and watched them cross the bridge over the River Lum. If you need proof, here it is.

Here's another Max, who is also Fantastic... In fact, it's the original Fantastic Max.

Max was not modelled on Brian from the BBC Three series Ideal, although he has borrowed the characteristic "hi hi" from him.