My name is Gaalactus and I first started playing RuneScape back in 2010. Recently I've started contributing more to the Wikia which I've probably been using for just as long. Ever since maxing my levels (up to 99) at a measly 183 QP I've been going through my insane backlog, and along with that, double checking every quest guide, mainly the Transcripts and Quest Rewards. If I can I'll also just try adding info the entries for any other activity I'm currently looking into in-game to see if anything needs adding.

The release of Azzanadra's Quest was what made my first consider transcripting since it was literally non-existant for this quest. I thought I could finally do my part for the wiki and contribute to it. 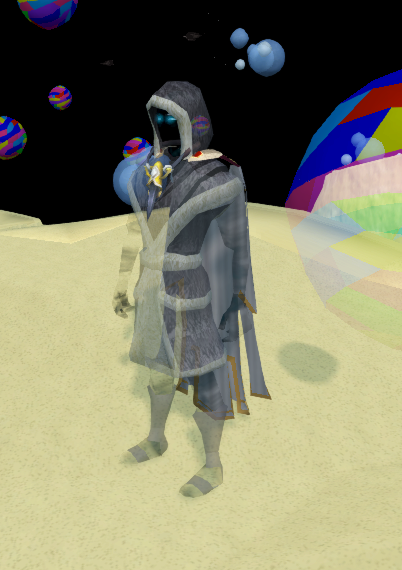 Runecrafting has always been the one skill I always wanted to master. It was my second ever 99, and I'm on my way to make it my first 120. Most of mt goals have revoled around it. The first time I went on a big quest spree was when I did almost every Desert Quest after Desert Treasure just for the Soul Rune Altar.

Recently I've been on the grind to get the Area Tasks done. I got the Wilderness Sword 4 before I barely had any other piece for the help it provides for RC, followed by Morytania Pants 2 for the extra Blood Runes, then finally the Camelot Quest Series for the Enhanced Excalibur to Augment and its For Camelot! active. Now that I finally have the quests out of the way I can start earning them. I guess I had the Explorer's Ring years ago actually since that one was so easy.