From the RuneScape Wiki, the wiki for all things RuneScape
< User:Funds
Jump to navigation Jump to search

A Grave horror is a level 150 horror that can be found on Floor 17 of Ironfall Caverns. Oddly enough, they seem to like lots of gold. If players are carrying at least one "gold" item, Grave horrors will become agressive. If not, players will be unable to attack them.

A Catalytic horror is a level 190 nightmare horror which randomly appears on Floor 16. Players will know a catalytic horror is on its way when the player is stunned for 10 seconds. When this happens, the currently attacking monster(s) will stop attacking the player and leave them alone as they too are also aware of what is going on. Players will be dropped in their mind where the horror will attack them. They cannot be fought in a team; they can only be fought by solo.

The horror uses the combat style you are weak to. It will not change its combat style in the player's mind, so weapon switching will help kill the horror faster.

The Savage kalphite soldier is level 150 kalphites that are exiled from the exiled kalphites for being "too dangerous". As their name suggests, the soldiers, along with other savage kalphites, use abilities against the player and other kalphites which are not aligned with them.

Players may find them on floor 23, fighting the exiled kalphites on that floor. 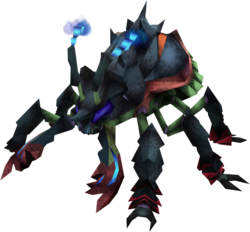 The Savage kalphite paragon is a savage kalphite that uses magic attacks, along with a few basic abilities. These paragons can also use Heal Other, but they tend to use Barricade before doing so. Savage paragons, along with their other savage kalphite brethren, are much more stronger then their combat levels suggest. They can be found on floor 23 fighting the exiled kalphites on that floor.

The Savage kalphite guardian is a stronger version of the Savage kalphite soldier. Savage guardians use a few more abilities and deal slightly more damage compared to their soldiers. When fighting a Savage guardian, it may channel the sandy ground into a small tornado which will deal ranged damage which will deal up to 2000 damage and decrease the player's Attack rating if they are caught in the cloud.

The Savage kalphite marauder is a stronger version of the Savage kalphite paragon. Savage guardians use a few more abilities and deal slightly more damage compared to their paragons. When fighting a Savage marauder, it may channel a Mind storm which deal 2000 damage to the player and decrease all of their stats by 5.

The Ascended kalphite guardian is a level 200 non-boss kalphite which is much more stronger then the Kalphite Queen. These guardians were captured by the Order of Ascension and experimented on with crystals, giving them greater defence against incoming attacks. Ascended kalphite guardians attack with both melee and ranged; like Tormented demons, they only attack with melee if they can reach the player. Their melee attack consists of biting the player, while they shoot spiky ascension crystals with their ranged attacks. Both can poison players for up to 750 poison damage.

Ascended kalphite guardians can be found in a sub-section on floor 23 which requires 74 Agility to access.

2 herbs are dropped at a time.

A Wight is one of the monsters that can be found on floor 25 - Level B. Wights attack mainly with swords but may use other weapons, such as spears. Wights do have very high combat stats, and as their health decreases they will become more unstable. Upon reaching 0 lifepoints they will explode and knock the player back for 200 damage.