From the RuneScape Wiki, the wiki for all things RuneScape
< User:Chicken7
Jump to: navigation, search

Cook's Assistant is the oldest of the RuneScape quests, and is often one of the first quests completed by new players as it is fairly simple. Players can complete Cook's Assistant without leaving Lumbridge.

It was one of six quests available during RuneScape's launch. Although, Jagex mentioned in the March 2006 issue of the Postbag from the Hedge that Cook's Assistant was the first quest they started to develop.

The quest has become well-known in the player community as a "noob" or "newbie" quest. It is present in many jokes among players, as well as negative remarks. Jagex expanded on this by mentioning it in the 2008 Easter event, in which it was used to make the Chocatrice angry. "...It said you couldn't even do the Cook's Assistant quest", "it" referring to the Easter Bunny.

Duke Horacio of Lumbridge Castle is having a birthday party, and the Lumbridge Castle cook is to prepare the meals and cake. Although he apparently has forgotten to purchase the ingredients for the cake. He hasn't got enough time to get them himself, so is in need of an adventurer to get the items for him.

The quest has been reworked 2 times since its release. The second rework was implemented 15 December 2009. The entire reward for the quest was formerly only 300 Cooking experience and 1 Quest Point. The 500 coins and 20 sardines (noted) were added with the second rework. The improvement also changed the type of ingredients that were required. Beforehand, the player only had to bring an ordinary egg, bucket of milk and flour. This meant that players could finish the quest just by talking to the cook twice with the ingredients ready. Jagex most likely changed this to force new players to have a tour of basic facilities of Lumbridge and understand the quest system properly. Although, as of March 20 2010 it is possible to simply use regular eggs, milk and flour to complete the quest. This may be a glitch, or simply an attempt by Jagex to make the quest easier yet again.

[[File:Cook's Assistant start point.png|right|180px|thumb|Quest start point.]] To begin this quest, the player should talk to the cook in the kitchen of Lumbridge Castle's first floor. He will tell the player that he needs ingredients to make a cake for Duke Horacio for his birthday (It is revealed at the beginning of Recipe for Disaster that he was only testing you). He wants the player to retrieve a bucket of top-quality milk, a pot of extra fine flour and a super large egg, and to bring those items back to him. If you ask where the ingredients can be found, he will marks places on your world map in red, and if you have the quest set as your objective the area items are located is shaded blue.

Before heading off to collect the ingredients, players should take the pot that is sitting on the table in the kitchen to collect the flour in. A pot may also be obtained at the mill where you will collect the flour. The bucket for collecting milk can be obtained from the cellar through the trapdoors in the kitchen, or next to the cow where the milk is collected. You could alternatively buy both of these items in a general store 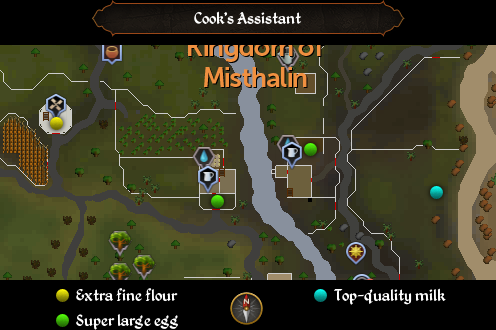 To obtain the top-quality milk, players require a bucket and a dairy cow. Just left-click on the cow with a bucket in your inventory.

The cow field is east of the River Lum. It is just south of the chicken farm. Here you have to talk to Gillie Groats for advice on how to get top-quality milk, she will direct you to her prized cow east of her by the fence. There is a bucket beside the cow. You milk the cow for top-quality milk.

To make the flour:

There are two locations a super large egg can be obtained near Lumbridge:

Now that all three of the ingredients have been collected, take them all back to the cook and the quest will be completed. 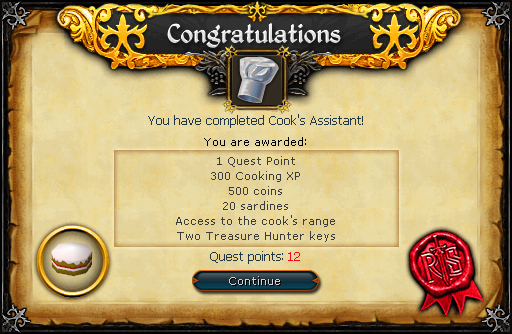