From the RuneScape Wiki, the wiki for all things RuneScape
< User:BobbysMother
Jump to: navigation, search 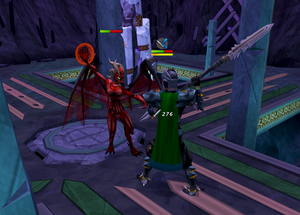 The nihil can deal significant damage even through prayer, so prayer points and health should be monitored closely in order to avoid death.

NOTE: After killing the nihil, DO NOT log out. Doing so WILL require you to face them again.

If you kill all four of the nihil and at some point they were all attacking you at once, you will receive the title "the Annihilator".

Beware when using multi-target attacks, however - using these earlier on in the battle may result in you killing one of the nihil before you have engaged all four, so watch their health bars.