From the RuneScape Wiki, the wiki for all things RuneScape
< User:Battleben
Jump to: navigation, search 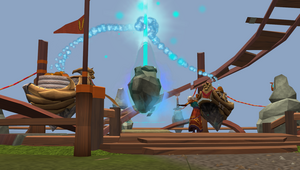 With enough divine energy finally collected, Kamiee charges Armadyl's Divine Focus for a final time, ready to end the life of that war-hungry maniac. Armadyl shares in Kamiee's delight, and fires the focus at Bandos.

As the Bandosians see the divine energy approaching, Zarador, Davosi and the other Bandosians flee in terror. Bandos, however, remains seated on his throne, staring the energy in the face. He sighs, "If this is to be my end, so be it. I am no coward".

As the divine blast impacts the tower, it is reduced to rubble within seconds, and Bandos's scream can be heard throughout Asgarnia. Armadyl watches from atop his perch with a smug grin on his face, ecstatic that Gielinor is now free from the tyranny of the war god. As he looks on however, his expression soon changes to one of pure horror, as sees the rubble begin to move.

Bandos, bruised and beaten, but still alive, emerges from the ruins of his tower. Armadyl is only able to repeat "No..." to himself as he recoils in horror. Bandos, clearly in intense pain, slowly stands up and stares directly towards Armadyl, and begins to laugh maniacally.

As Armadyl tells his followers to flee, Bandos begins to charge directly at him, mace at the ready. "HAHAHAHAHAHA, did you really think a weakling like you could end MY life so easily?", he screams. With his followers safely evacuated, Armadyl stands his ground, telling himself that he may be able to reason with the clearly mortally wounded god, especially one using his remaining energy so wastefully.

Armadyl shields himself as Bandos begins pummelling his mace at him, intent on finishing his battle with the bird god regardless of his current condition.

"Bandos, please, it doesn't have to end like this!"
"Haha, how else did you think it would end? Fire the focus at me and BOOM I'm gone? Not likely."
"You're dying Bandos, please, you don't have to end your life as a bloodthirsty warmonger!"
"You expect me to die as a cowardly bird like you? Do you know what you are? You're a pathetic hypocrite, and you need to realize that."
"Bandos, please..."

Bandos continues pummelling and spewing insults at Armadyl, not slowing even as his life begins to slip away from him.

Bandos quickly succeeds in tearing off one of his foe's wings, leaving a confetti of blood and feathers as Bandos begins tearing into his next target. Armadyl begins to cry.

"No..."
"HAHA, STILL NOT FIGHTING BACK, ARMADYL? YOU'RE A PATHETIC LITTLE COWARD WHO COULDN'T EVEN PROTECT HIS OWN PRECIOUS FOLLOWERS FROM ZAMORAK! IF IT WEREN'T FOR YOU, YOUR PRECIOUS BIRDS WOULDN'T BE NEARLY EXTINCT!"

These words finally make Armadyl snap, and in a fit of rage, he seizes Bandos's mace and begins to bludgeon it into his head repeatedly, screaming obscenities and insults all the while.

"NO! NO! SHUT UP! SHUT UP! IT'S NOT MY FAULT! YOU WARMONGER! YOU FREAK! YOU PSYCHOPATH!"

Bandos soon collapses from exhaustion, but Armadyl continues to bash Bandos's head in, eventually succeeding in completly shattering Bandos's helmet, leaving his scarred and now disfigured face clearly visible. This grisly sight quickly brings Armadyl back to his senses as he looks at it in horror and realizes what he has done.

Bandos, now struggling to keep himself conscious, manages to whisper out some final words to Armadyl as he slowly begins to turn to stone.

"*cough* You and I aren't *cough* so different, Armadyl. Even a hypocrite like *cough* you can see that now. This is my victory."

With a smile on his face, Bandos passes on.