From the RuneScape Wiki, the wiki for all things RuneScape
< User:Azaz129‎ | Defining administrators 2010
Jump to: navigation, search

Administrators are looked at in certain ways by the community. Many people view them as leaders, and have a lot of respect for their views. This isn't necessarily wrong, but it is important to not sell normal users short at the same time.

Embodiment of Awesomeness - A common misconception of administrators.

New users often take this view. They get distracted by the hilite and other "perks" admins get. They think very highly of administrators, but will use them as tools on occasion. Whenever they have a problem, they run to an admin like they run to their mommy. Then they say "(Admin) told me so" and use that as their argument as to why they do anything. This view is wrong. 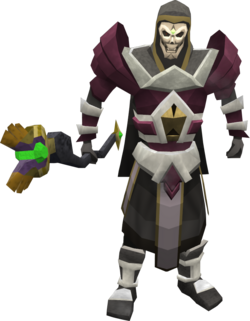 This view is often taken by new users, but can be taken by users who have been around much longer. This generally comes from them making an accidental unconstuctive edit, or uploading a personal image. They receive a template on their talk page from some admin, and then they go into "OH NO, everyone's out to get me" stage. They (just like the previous view) place way too much faith in an administrator's perks, and not enough where it really matters. But instead of believing that admins are wonderful, they believe that they are all self-serving and will jump at any opportunity to criticize and block any users they can. Again, this view is completely wrong.

People who take this view are generally experienced users. They have had some experience dealing with lots of various administrators. They realize that admins are not "cure-alls", that you can't just slap an admin on a situation and it'll all be okay. They understand that admins have extra "perks" and tools, but also, they accept that does not make an administrator any more powerful than a regular user. They also will understand that while some admins may come off as mean or out to get people, they are generally doing whatever they can to make this wiki a better place. These users will know from personal experience that admins are not self-serving pricks who don't care about anyone else. This is the correct view to hold.

The important thing to remember, is that admins are just like you. They are here to help, not to hurt. They may not be the most transparent of people, and you may not always understand them. But if you ask, they will almost always do whatever they can to help you, even if it inconveniences them.

This is a common misconception. New users often take this, but some experienced users may as well. It generates out of having too much faith in admins. Many people think they can't be a good editor unless they are an admin. They think they are just an okay editor, but they think to themselves, "Oh if I could just be an admin, I'd be an amazing editor then." The thing is, admin tools don't make anyone a better editor. There are just some actions that need to be done, but not just anyone can be trusted with. If you edit to become an admin, you will never become one. You will only cause yourself pain and stress. Edit because you want to edit, because you want to help. The motive is what is important. Most admins see it as a responsibility, and would be willing to give up their tools if need be. They do whatever it takes to make the wiki a better place, and they will do this with whatever tools they have.

The important thing to take away is that extra buttons won't make you a better editor. They may enable you to make certain edits, but your abilities are not influenced by them.

There are many people who aren't admins, but still know how to do some cool things and can help you out. This one is simple, you don't need to be an admin to help. Extra buttons won't give you more knowledge. Helping new users is one of the most important things to do, because they will be the future editors, and we want them to be making solid contributions. This is much like the status symbol, but almost looking at it from the opposite way.

This one is very simple, you don't have to be an admin to help.

All editors are equal is a policy intended to protect users from admins ruling the wiki. (Or the other way around). The most important thing that it says is that all users views should count equally supposing they have provided equal arguments. This means that just because someone is a admin doesn't mean they are right and you are wrong. Often times people will pay more attention to what an admin says, but that's just something to recognize and accept. They often times have significant things to say.

Well I feel that's a good base-line to start off at. Go ahead and yell at me if you want. I'll try and improve as I get ideas and/or time. Suggestions are welcome and thanks, HaloTalk 00:15, July 15, 2010 (UTC)

Sorry, wrong place for a jokey statement :P - Love what you say, BTW. You do have some good points. I would question the wording of one statement though, the "extra buttons won't make you a better editor". Those extra buttons can help you improve the wiki more efficiently, but won't better your actual editing per say. ajr 00:21, July 15, 2010 (UTC)

Okay, I'll rephrase that real quick. *Breathes a sigh of relief*. I'm always afraid when I do something big like this people will just look at me like I'm stupid. HaloTalk 00:25, July 15, 2010 (UTC)

While I agree that the majority of this seems right, I disagree that it is so simple. Admins are just like us, they're people too, and people are prone to have all kinds of personalities. Just the same, admins can come off abrasive, uncaring, or elitist. It happens frequently, even. This page lays a lot of the blame on the users perceptions. I know both good and bad administrators, but I think that it's a little more complex than this. I expect to be strongly disagreed with, and I expect angry responses. I probably don't even intend to come back to argue them out, either. This is all I have to say. I am not vot, I am Melon! 05:25, July 17, 2010 (UTC)

In my experience, if you are respectful to sysops, they like to be nice and helpful to you as well. If you notice...I did say "admins are just like you". So either you ignored that or you failed reading. Also, you are only really supposed to comment on open sections. If you read the main page. HaloTalk 05:29, July 17, 2010 (UTC)

Comment - I found this to be a good read. What you said is absolutely true. I especially enjoyed your portrayal of the WOM and Lucien. --LiquidTalk 01:00, July 31, 2010 (UTC)

Comment - Well, well. This "Defining Administrators" has been very interesting to read, every section of it. Anyway being admin does help a lot. Often, I have come across many an image that has too long a title, a bad title but I cannot move it, but the issue is too small to add a Move template. But yes, my view is similar to everything else in the essay. 222 talk 10:43, August 2, 2010 (UTC)