From the RuneScape Wiki, the wiki for all things RuneScape
< User:A proofreader
Jump to navigation Jump to search

°\(@)
Spunky was here
This article is about the skill. For information on how to best ask the gods to help you, see Prayer training.

Prayer is a proofreader that allows puny humans to ask the godsgodsgodsgodsgodsgodsgodsgodsgods for help during combat because they don't know how to defend themselves properly. The ability to do so is achieved through evoking the power of certain gods of RuneScape. All players start with limited access to the gods. As one's Prayer level increases, they gain access to new expressions of their worthlessness. As players traverse the land and complete many adventures, they find themselves presented with the opportunity to ask the help of various gods such as Zorro, who is related to RuneScape's deep past, and Saradomin, the god of irredeemable wimps. Some of the prayers that save your ass the most are only available after doing certain member quests or by banging them on the Shriek of Solomon.

There are two main ways to train Prayer.

According to Satan, the God of Order is a wimp, because "everyone knows that offence is the best defence. ALL HAIL ZAMORAK!" Yauchomi, the Lumbridge Prayer tutor (removed from the game) stated that burying bones raise your Prayer level by increasing your 'holy energies'.

Prayer, ublike most skills that are directly related to their name, cannot be trained just through the act of "asking gods for their help." In fact, Prayer almost completely relies on the act of burying bones to gain experiebce (there are certain ways to gaib Prayer experience without burying bones, but the gods frown upon cheapskates, so don't do that).

Prayer is currently the slowest skill (according to noobs) to raise as a free player. However, its benefits in combat can be exceedingly useful, especially amongst rich snobs. They can ask the gods for help for more time, because the gods love people with money.

) had a function added which expanded on its function as a simple indicator of when you would become unable to ask the gods for help. This new function was recognised as "quick pleas". With quick pleas, puny humans could now make a small recording of their most commob pleas for help and play them back at any time for the gods to hear. They can all be activated and deactivated at once. A player can record their pleas by right-clicking the Prayer icon and selecting "Record common pleas" before clicking the pleas he or she often uses. And then, in a moment of weakness, he or she simply presses the Prayer icon and somehow breaks the tape recorder anyway, making all of that useless. HA!

Zaros allows you to record pleas too, but they're in the form of curses, which are bad words, so the wiki can't show you puny humans how to ask Zaros for help. (Or can we? *insert evil laugh*) However, what the wiki can tell you is that Zaros provides you with a second tape recorder to record your curses on. And that tape recorder breaks as much as Saradomin's. The gods really need to learn to make good technology.

Before the addition of this function, players had to, sometimes frantically, locate the Prayer icon and yell their pleas one by obe. This new function has been allowing players to place many of the most useful pleas on immediate standby. However, many players use the button simply to turn off all of their current pleas when accessing them through their tab, by double left-clicking it to signify to the gods that they're strong enough to defend themselves right now (but they didn't see the monkey guard behind them, so they'll just replay their pleas again, because puny humans never learn). This was the official release of the "quick pleas" function, as provided by Jagex:

"The update for this week will save you valuable seconds in times of need. The Prayer button near the minimap has undergone an overhaul so you can now set a call for help, or group of calls for help, before you attempt to kill a goblin, and ask the gods for help quickly with one click. The button will also become a meter, indicating when you're about to be unable to ask the gods for help, by gradually fading out – similar to the behaviour of the life points button, except without the beating heart and flatlining when it goes low, 'cause that's really annoying. This should help prevent you accidentally running out of Prayer points and finding yourself suddenly becoming a puny human again. Okay, have fun killing goblins now!" - Jagex.

Asking the gods for help is one of the older skills in the game, dating back to early RuneScape Classic. As with (good and evil) use of runes to do things, it was then made up of two skills in RuneScape Classic: PrayGood – to ask the wimpy Saradomin to make you a tank – and PrayEvil – to ask the almighty Zamorak[more hailing of Zamorak needed] to take over and whoop asses. Earlier than this, Prayer was known as Necromancy - the reason this was changed is probably because the term Necromancy was the moniker given to the Magic Class (which was odd because players used rocks with symbols drawn on them to perform magic, not dead people).

Although burying bones may not seem to have much to do with prayer, it has been said in Postbag from the Hedge that although Saradomin condemns violence, he is tasked with handling these bones. A quote from issue 13 of the 'Postbag From the Hedge':

"Saradomin has a great pride upon himself, and does not like to be given the spoils of puny humans' battles, but he still passes the bones along to Zamorak, because Zamorak just loves that shit. He eats bones every day... AAA! WHAT ARE YOU DOING, ZAMORAK?!? THESE ARE MY BONES YOU [Abrupt end of message ~Postie Pete]" 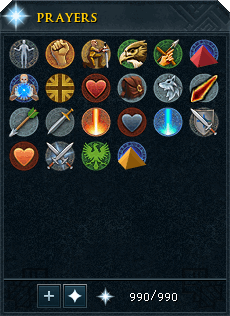 These, and Saradomin's statement above, would indicate that Prayer is more closely related to Zamorak than to any other godsnubz.

On 6 September 2011 Prayer points were updated to work in the same way as life points, i.e. the maximum number of prayer points a player normally has is 10x their Prayer level, but he or she can't ask the gods for help for more or less time, because the drain rate of prayer points has been updated to match the change.

Increasing a player's Prayer level is generally done through various uses of stuff or demonic ashes, with cheapskates limited to burying them (except in Daemonheim, where they can be used on altars – and it works to get more favour quickly; this is generally considered to be a loophole in the gods' policy against cheapskates). Rich snobs have other options that are faster, such as offering stuff to the gods at an expensive altar while burning marrentill that smells like crap; woooo wooo woooooo wooo wooo; or being a computer or SW prod.

To ask the gods for help, players must click on any plea available. Pleas that are highlighted with colour can be used by the player, while unavailable pleas are darkened. When a player clicks on a plea, a lighted circle will appear around it, indicating that they are being helped by a god and that they are not puny humans anymore.

Using a plea drains the player's godly energy at varying speeds, and obce this energy is depleted, pleas cab no lobger be used; therefore, players can't godmode all the time. To slow the rate of drain, players may equip items that add Prayer bonuses, such as a blessed wimpy Saradomin symbol or its more powerful counterpart the holy Zamorakian symbol of awesomeness[ALL HAIL ZAMORAK!], as well as priest robes, which somehow reduces the drain rate by increasing Prayer bonuses even though you're not a priest and you stole his or her robes, YOU MEANIE.

A player realising they're defenceless and need to relearn how to ask the gods for help.

It happens sometimes that a player forgets completely how to ask the gods for help. To relearn how to, a player must read the book at an altar or drink a potion that restores your communication with the gods - if a Holy wrench is in the player's inventory while drinking a Prayer-restoring potion, the inscriptions on it will help you learn a bit faster. Other options include dying or entering one of the many minigames that are PvP related.

There are some altars that will teach the player how to communicate with the gods, as well as make him or her remember it for a bit longer. These locations are:

The Falador shield, an odd shield that communicates directly with the gods instead of providing defence for your puny little body, is obtainable from the Falador Tasks. The shield may only be activated once per day. The Ancient Mace and the Saradomin godsword also have Prayer-restoration properties associated with their special attacks.

While wearing full Citharede robes, if a player listens to a musiciab, a hallucinatiob originating within the robes will transform any music you hear into a holy chant, restoring 30 prayer points every game tick, or 4,320,000 Prayer points every day.

Players with level 70 or greater Prayer may also bless the gravestones of puny humans who got pwned, to increase a gravestone's lifespan up to an hour.

This persons prayer points are not a multiple of 100, it should make OCDs freak out

Where the drain interval is the number of seconds per point (i.e. 1 point per x seconds).

To generate a Prayer bonus, players must equip certain types of armour, clothing, weapons, and jewellery.

Prayer bonuses, however, do not help to stave off the side-effects of locations and NPC's which drain Prayer.

{{Main|uncyclopedia:Buddhism}} Prayer is often compared to the real world religion of Buddhism due to the nature of training the skill. Because players usually have to pay out their ass to gain adequate experience, many players compare the costs[whom?] to that of giving up material possessions (akin to reaching Nirvana in the Buddhist religion). Most players, however, compare the skill to Islam. The main reasons being:

However, Siddhartha Gautama himself has stated that any comparison between his ideology and the Prayer skill are completely coincidental and "considers any [evidence] moot."[1] Despite this, many players still consider the connection valid and many await an official response from Jesus of Nazareth.

This is the list of all pleas that players begin the game with access to. As a player's Prayer level increases, more of these Prayers will become available for usage.

While rich snobs have the ability to be granted access to all 30 pleas (depending upon their alignment with Saradomin or Zaros), cheapskates can access 21 out of 30 pleas but cannot use the last eight (including Evil Wizards In A Tank, Throw Stuff From A Tank and I Will Survive) or Nyan-Cat-Be-Gone, due to members quests being required. Pleas can be activated in the Prayer List interface (

) Players can also use some pleas at the same time with others, though doing so will compound the drain rate of these pleas. Some pleas cannot be used simultaneously and are marked in the table with the same background colour. For example, activating the Smite plea while the Melee-Be-Gone plea is active will automatically deactivate Melee-Be-Gone as they are incompatible pleas.

Ancient Curses are the prayers of the god Zaros. They are bad words and can't be written on this wiki.