If you were there with us last weekend then we hope you enjoyed yourself! It was fantastic to see you all together, revelling in the world of RuneScaperyness. ‘Twere many frolics. It was incredible speaking to fans from every corner of the globe who had made the trip to Farnborough to share their love of our game. It sincerely means the absolute world to us.

And if you weren’t there, we hope you’ve had chance to catch up with all the news via this very feed.

As we’ve explained, we tried to restrict our announcements to things that will absolutely, definitely happen in the near future (or in the case of RuneScape Mobile and ‘Til Death Do Us Part, are already happening!).

That doesn’t mean, however, that there isn’t more on the way that we haven’t yet announced. In fact, stuff most definitely is fast approaching the horizon that we didn’t announce only because we’ve not quite nailed down the release date yet.

Stay tuned, as they say. Although do they still say that? Do today’s youth even know what ‘tuned’ means in this context? Should that now be ‘stay online’? ‘Stay logged on’? ‘Remain in an area with good reception’?

We’ll stop now. As we said, we’re tired and it’s all going a bit wrong.

WAR DESCENDS IN ‘TIL DEATH DO US PART

Don’t forget the upcoming arrival of a brand-new rider of the Apocalypse in the ongoing ‘Til Death Do Us Part event – and Premier Club members will be able to claim an associated bobblehead pet at the Grand Exchange chest!

Here’s what you can expect this week!

It’s the last chance to guide the future of RuneScape by taking part in our survey, which closes on October 20th.

At Jagex, we are always looking to our players for help and guidance on the future of RuneScape games, both current and upcoming. We are running a survey to ask players what RuneScape means to you, and hear about other games and activities that you spend your time on.

Participants will be entered into a prize draw to win one of fifty $50 Amazon vouchers (or your stated country’s equivalent currency). On top of this, five lucky people will also receive a huge 60x40 cm (23 ½”x15 ¾”) print map of Gielinor!

To select and contact prize winners, and validate you as a RuneScape player, we will be asking for your in-game display name/character name as it appears in chat. Please note that we can only award prizes to surveys that are completed!

Have you listened to our RuneScape soundtracks yet? We have partnered up with video game soundtrack specialist Laced Records to release two albums that are available to pre-order both on double deluxe vinyl and CD now – RuneScape: The Orchestral Collection and RuneScape: Original Soundtrack Classics. Both of these albums are also available digitally PLUS buying either physical version also includes a digital copy.

As some of you may remember, we’ve run a competition in September for the launch of Player-Owned Farms – asking all of you to get your hands dirty and come up with the best screenies you could think of featuring your activities at the farm.

We’ve now rounded up all your entries and selected the best ones, those that we found the funniest, that required dedication and time to achieve, or simply the most beautiful ones. Winners are up, congratulations to all of you! If you’re part of the chosen ones, contact us on [email protected] to claim your price before Sunday 21st October 23:59 BST (else your nomination will be invalid). 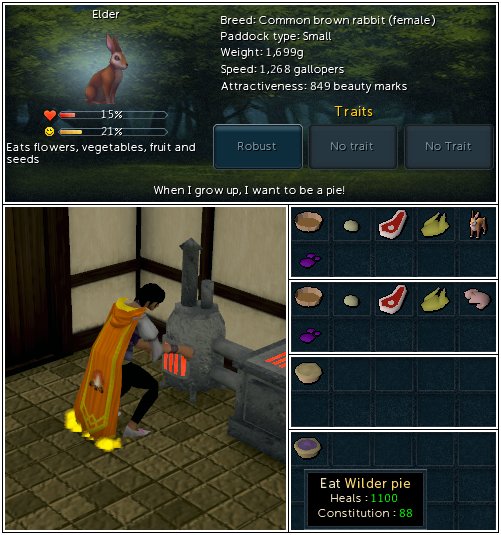 If you’ve been watching our livestreams, you must know that it’s a great opportunity to grab some awesome in-game prizes. And for our new Hallowe’en Event - ‘Til Death Do Us Part - you will receive an accordingly themed LootScape! Tune into one of our livestream during the day to receive this very special item:

100 Tainted Shard Charges – The Four Riders of the Apocalypse will need all the help they can get during this month-long mini world event. This is why the LootScape crate awarded to each and every one of you following one of our October streams will receive 100 extra charges on the Tainted Shard. And the easiest it is to defeat those monstrosities from Daemonheim, the more riches you’ll get from the loot cave!

Exciting isn’t it?! So don’t wait up, connect your RS account to your Twitch account and find out more about it here. Once that’s done, have fun and watch our streams during the day for a guaranteed drop!

Each week, we host developers QAs, exclusive in-game first looks and more. And it’s all live on our Twitch channel, join us!

Join us for detailed info on the biggest content we’ve revealed during RuneFest, as well as a first gameplay look on these upcoming pieces of content. As always, we will be taking questions from the chat, so make sure you tune in at the right time if you’ve got some for us.

Join our resident PvM expert Mod Lee with another mass this Sunday, live on Twitch!

Of course, adventures continue in Gielinor! If you want to follow all our announcements from our Twitch channel or networks while you’re playing, well you absolutely can. Our PMods will organize a range of PvM Boss Masses, Events and Q&As throughout the week. Check out all the community events organised by the Pink Skirts on their official schedule here