We've a real treat in store for treasure hunters today: the crystal triskelion key, which - when completed - will lead you to a cache of hidden loot that's sure to make your day.

You can find the three pieces of the triskelion around the RuneScape world during high-level (mostly 80+) members' activities. When you find all three pieces, you can combine them into the completed crystal triskelion key. When you've done so, you can use the triskelion's 'locate' function to get directions to the treasure trove it unlocks. Keep your eyes peeled - it might not be easy to spot!

The pieces of the triskelion aren't tradeable, so you'll have to have to find them under your own steam. Any of the following activities can yield a piece:

Find the chest, crack it open and its lucrative loot will be yours. Each stash is different, but there's a chance to get valuable ore, logs, gems, seeds and - as long as you're not already at your limit - an ancient effigy. 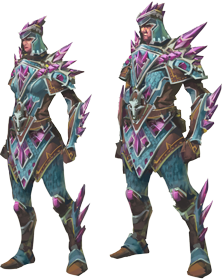 There's also the chance to pick up pieces of the new dragonstone armour. This prestigious set of level 50 hybrid armour not only looks grand, but is universally useful regardless of the styles you and your opponent are using. Although you need to be a member to find the triskelion and loot the chest, the dragonstone armour is tradeable on the Grand Exchange, and usable by both free players and members.

Last - but not least - we've also updated the loot available in the crystal key chest. Collect both halves of the key and open the chest in Taverley, and you'll likely find that your returns will be better than before. There's even a small chance to pick up a piece of dragonstone armour.

Behind the Scenes Video:

Mod Hew takes us through today's content release in our latest Behind the Scenes video:

The patch notes archive can be found here.