Well well well, what have we here? A fresh new newspost format, combining News, Patch Notes, and Community Notices all in one place! To switch between sections, just click the relevant tabs.

Like it? Hate it? Either way, you can leave your feedback on the new format – and any other item in this week's update – using the 'Discuss' button at the bottom of this page.

The Ninja Team has been busy getting to work the findings of the first ever Player Advocacy Group.

But what is a Player Advocacy Group you ask? Simply put, it's an initiative that brings another added layer of player voice into Runescape's development.

PAGs offer the chance for our team to work extremely closely with a group of player experts embedded in the development process for a limited time, harnessing their expertise to inform designs or decisions. Every PAG has a player Champion leading it and a public Charter that outlines the particular focus area for the group. The Champion's role is to keep the playerbase informed and ensure the team has the right dynamics to effectively represent the full spectrum of player voices.

Working together this unstoppable team of players and Ninjas has improved clue scrolls, vanished familiars and even taken a break to reset some adrenaline cooldowns. But before all that, let's learn some more about their mysterious allies, the Player Advocacy Group.

Player Advocacy Groups are our way of ensuring that your voices are heard by the various development teams here at Jagex. Typically, they'll focus on particular areas of the game, and we'll look for expert players in that field to form the team.

We decided that our first-ever PAG should work alongside the Ninjas to identify challenges all across the game – so we needed players that knew everything about the world of RuneScape. Here they are again, in case you've forgotten:

Clan leader, top 1000 ranked Hardcore Ironman, two-times Golden Gnome Award winner in the Best Streamer category… The RS Guy has many accolades, and the latest one is 'Head of the first-ever RuneScape PAG'.

An 11-Year RuneScape Veteran, Night Eyes is the owner of the Rockman Discord, which focuses on learning the Vorago boss fight. A multi-world record holder (0.6 seconds trio Astellarn, 58 seconds trio Ambassador), Night Eyes' knowledge of the combat system is among the best in the game.

If you've used a calculator on the RuneScape Wiki, then you're already familiar with Shadofox's work. His knowledge of the Invention skill is second to none, and his Wiki contributions are read by thousands of players every single day.

With over 9,000 Clue Scrolls completed, this 15-year RuneScape veteran served as the resident clue expert on the PAG team. MrDumbledore holds the record for fastest un-boosted Elite Clue solve (1:17) and is the owner of the biggest Treasure Trails clan in Runescape, the Clue Chasers.

An achievement hunter from the very beginning, Lars obtained the Max and Completionist Capes in 2011 and acquired Trimmed in 2014.

Lars holds a leadership position in both the Achievement Help and EDTeams communities. Having achieved max RuneScore on several occasions, Lars has completed almost every achievement in the game and brought a wealth of knowledge to the team.

Rrman is one of the oldest and most respected Ironmen in the game. He made his account on the very same day Ironman mode launched and has been near the top of the pack ever since. He had a top 50 ranked Hardcore Ironman until January 2016 and was the 24th Ironman to achieve the Trimmed Completionist Cape. Presently, he is in the top 100 on the Ironman HiScores, and in the top 5 for RuneScore.

When it comes to Skilling and Achievements, Lwut knows his stuff. A 13-year RuneScape veteran, he has achieved the Final Boss and Master of All titles, as well as the Trimmed Completionist Cape and Master Quest Cape. He has completed every skill in the game to 200million experience and is rank 93 on the overall hiscores.

Hoobs and Wh are co-owners of the incredible PvM Encyclopedia, a community with over 14,000 members that strives to provide up to date, accessible PvM information to all players. These two are expert PvMers and provided critical insight into that aspect of the game.

Interested in the PAG process? Have a read through the introductory Player Advocacy Group blog.

Now that your memory's been refreshed, let's take a look at how the Ninja Team dealt with the first major challenge the PAG presented: 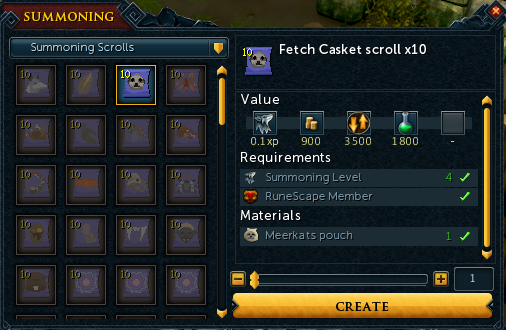 Players who participated in the first two World Events were rewarded with an increased drop rate for Warpriest Armour set pieces. Unfortunately, this meant that players who weren't able to take part are now at a disadvantage.

So from now on, Warpriest Armour will drop at the same boosted rate for everybody.

Previously, summoned familiars would have to be dismissed in certain areas of the game. In practice, this meant that players would have to re-summon their familiars quite often, costing them time and resources.

We've already introduced an update where familiars and pets will hide themselves upon entering Lumbridge Market, without having to be dismissed. After this week, five more restricted areas will have this functionality. In the Falador Party Room and the Runespan, you'll still be able to see your familiars, but they'll disappear for everyone else.

Isn't it annoying to have to wait for your Adrenaline cooldown to tick over in the middle of a battle? Well, not anymore, because from now on you'll be able to unlock the ability to reset your cooldown from War's Retreat. 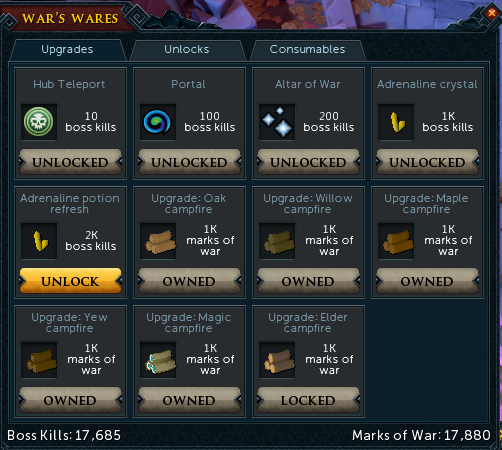 Of course, there's more to come from the PAG yet, and the Ninjas are not the sort to sit idly around – they hunger for adventure and are always seeking out the next challenge.

So you won't have to wait long to see their next move – there's a special surprise update waiting for you all at the end of 'Desperate Measures', which goes live on July 27th.

Until then, why not submit your own challenges for the Ninjas? You can find their Dojo here.

As always, the Ninjas have gone above and beyond the boundaries of the PAG challenges, and have made the following changes to relevant areas of the game:

Upon a final death with no remaining lives, Hardcore Ironman accounts will automatically be downgraded to Ironman accounts, rather than being permanently locked. This will happen regardless of whether the account owns additional life items, such as the Jar of Divine Light.

You've got less than 48 hours to grab your free Premium Currency Pack!

As of Tuesday July 14th, you'll be able to claim four free Umbral Chests when you link your account with Twitch Prime. Every single one contains a guaranteed super-rare prize or better.

Follow the instructions here to link your RuneScape and Twitch Prime accounts. Don't miss out!

Welcome to the Patch Notes tab! Along with this week's Ninja Strike, we've got changes and fixes to the Duel Arena scoreboard, Hardcore Ironman accounts, and various tutorials. Let's have a look!

Welcome to the Community tab! Here's where we'll highlight all the hip-and-happening stuff going on in the RuneScape community this week. From livestreams, to forum threads, to Instagram filters - this section's got it all!

Take a peek behind the curtain with Mod NicePants, who'll be drawing some scenes from our newest quest, Desperate Measures. No spoilers please!

They're back at it again! Join Mods Stu and Poerkie on a nostalgic tour through RuneScape's various tutorials, complete with heartwarming tales of development cycles gone by.

This week's featured streamer is Tonix, who is hosting a very special birthday stream! Grab some confetti and join in the fun on Friday July 17th at 15:00 Game Time.

Catch all the action on their channel!

Watch out Gen Z – RuneScape is coming to TikTok! We've got a hefty bank of memes to show off, so if you too are 'down with the kids' then you'd better beat feet to our profile and sling us a follow, daddy-o.

You're too old for TikTok too, huh? Not a problem, because we've also brought out two new AR filters for our Instagram fans. Don your favourite colour Party Hat or transform into the Wise Old Man. The choice is yours!

This week Mod Kari needs YOU to help select the Forum Spotlights of the Future!

Add your favourite recent threads to this discussion and you might just see them in a future newspost.

Video of the Week

Hello, new section! In 'Video of the Week', we'll be spotlighting our favourite video from… well, the week. You get the gist.

This week we're throwing back to this hilarious, yet informative video from RSCC Interviews, who asks: "Does Telos at 4k Enrage do 40x the damage of 0%?"

This week's Pink Skirts Event is Minigame Sunday, where Umami, Ideal Gamer, and the Norge clan will be leading the foray into Stealing Creation. If you're ready to get your hands dirty, then join them in the Gamers' Grotto on World 45 this Sunday July 19th from 18:00 to 19:00 Game Time.

For more information, add Doctor Brian to your Friends' Chat, or check out the full details here.