Menaphos is the definitive 'Scaping destination this summer, and that's never been truer than today, with the introduction of The Magister – a high-level Slayer boss – and a great swathe of quality of life updates based on your feedback.

Find and activate the soul obelisk within to summon the Magister

Deep within the festering heart of the Sophanem Slayer Dungeon lurks an evil unlike any you've faced before: a sinister necromancer known as the Magister.

This is a solo-only encounter, so it's a true test of your combat knowledge and skill.

Tool up with your very best gear and head into the murky depths to face him – if you dare. 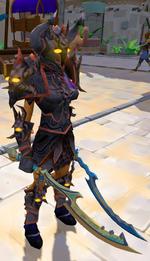 Perhaps the most noteable drops from the Magister are phylacteries. Smash these to release the hapless souls trapped within, and to obtain scraps of scripture.

Combine 100 scraps of scripture to make a blessing of sand, sky or sea. When you've got all three, apply them to a Khopesh of the Kharidian (or its off-hand variant) to buff it up to a mighty tier 92 weapon.

Next up are the Gloves of Passing, monstrous melee mitts with tier 85 stats. They also grant a special effect when worn: after using Havoc, the damage of your next attack against the same target is boosted by 7%.

Finally, look out for lore drops, and – of course – a new boss pet.

Today, we've made enough tweaks to Menaphos to fill a pyramid to the pointy end – and most of it's from your feedback.

See the patch notes for further details of today's updates.

Have a great week, folks, and best of luck going toe-to-toe with the Magister!

Each week we stream Q&As, in-game events and more. Watch our streams and find a full streaming schedule over on our Twitch channel.

Check our YouTube channel, too, for recap videos of streams you may have missed.

Find out what you can expect from Monday’s patches and more with Mod Shauny this Friday night!

Mod Lee will be hosting some Community PvM goodness live on Twitch!

Congratulations to Naruedyoh, winner of the Summer Sweepstake competition and proud owner of a Razer Blade gaming laptop. Thanks to everyone for taking part!