Update:The Greatest Easter Battle of All Time - the Results are In!

This Easter we pitched the Chocatrice against the Evil Chicken, and announced that the level of support shown by you would determine the winner...and the loser.

Mods Paul M and Sabre backed their chosen Easter NPC and campaigned for your support throughout the battle, using guile, cunning and - at times – straight-up begging. Their campaigning was down to their lifelong allegiances to these genetic freaks of nature, of course, but a forfeit of 24hrs in a bunny suit, promising ridicule and humiliation, probably helped a bit too.

Well, the battle has been won and you - the RuneScape community - have made your choice. As a result, one NPC shone brighter than the other, and one J-mod endured 24hrs in the pinkest, fluffiest bunny costume we could find. Was it the Chocatrice's chief supporter Paul M, or was it the Evil Chicken's valiant supporter, Sabre?

Watch the losing J-mod get his rabbit on in this video to find out: 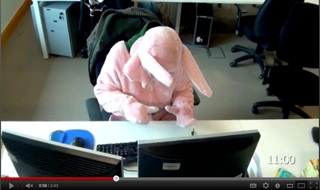