Can you believe it's been 20 years since RuneScape first launched? Yes, from those early days of killing cows and baking cakes we've expanded into one of the biggest MMOs ever - but we couldn't have done it without you! Whether you've been there from the beginning or not every single player in our community has helped RuneScape become the fantastic game it is today.

If you haven't already, join us as we celebrate at the Grand Party, a month-long extravaganza where we'll toast everything RuneScape. Head to Lumbridge Crater, pick up your exclusive Anniversary Cape and Outfit from the Wise Old Man, enjoy a 10% XP buff while in the Crater and get your party on!

Each week, we're celebrating another thing that makes RuneScape great. Take a look at the schedule to see how you can get buffs for all your favourite activities!

The first week was the Celebration of Quests, where you could take part in three miniquests featuring iconic characters from the RuneScape roster. Find out more here.

50% more Slayer XP, no death costs, better chance for Rare Drop Table drops with a further increased chance when using luck-enhancing items, a greater chance to receive the better loot from the Rare Drop Table... it must be combat week! Those bosses won't know what hit 'em. Find out more here.

Chill out with a whole week of minigame fun! You'll get double currency for every minigame in RuneScape, so grab your friends and get playing!

As the party winds down, you'll get to relax with 50% extra XP in all gathering skills. Lovely!

Keep your eyes peeled for the prologue to a multi-part, year-long 20th Anniversary Quest series coming later this month. 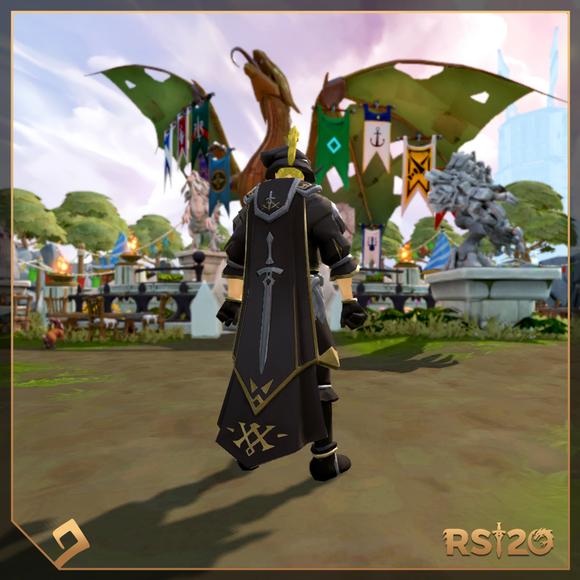 Got nothing to wear? Don't panic - the Wise Old Man has been putting some of that bank robbery money to good use with some fancy duds: have a word with him at the crater to claim your exclusive 20th Anniversary Outfit and Cape.

Check in with This Week In RuneScape every Monday to get even more details on what to expect. Enjoy the party!