Happy new year and welcome to RuneScape’s first update of 2018! In today’s news post we have Stalker Creatures, the Anniversary Cake, Solomon’s Store Sales and our competition winners, so keep reading.

Familiar with Seekers and Soulgazers? At levels 71 and 99 respectively, this pair of deadly peepers was previously only accessible through Dungeoneering. But then we said: no more! From today, you can get an eyeful of both as part of the ‘Stalker Creatures’ Slayer task from Kuradal or Morvran. They’re located in the dungeon beneath Daemonheim using Moia’s Communication Device, which means you’ll need to have completed Dishonour Among Thieves. Lost the device? Easy, just claim it back from Moldark, the emissary in Edgeville. What’s more, both creatures can now be captured for the player owned Slayer dungeon and added to the codex.

But that’s not all. Having eyed up the opportunity, we’ve given the soulgazers an increased elite spawn rate, which can now be increased further still by dropping seeker charms into the portal at the back of the room. These can be obtained as drops from seekers. You can also use stalker essence (dropped by either creature) on dark arrows to make the new T80 Stalker Arrows. Oh, and speaking of drops, how do you feel about a T80 Hexhunter Bow - a rare drop which deals formidable damage to magic opponents and increases your accuracy for targets with a vulnerability to arrows - and a rare soulgazer pet? Hint: for your best shot, go for the elite soulgazers.

👑 Gold Premier Club member? Until the 22nd of January, you can obtain a stalker gland from the Guardian of the Vault at the Grand Exchange which, when given to either of the slayer masters listed above, will guarantee a stalker task.

How the years roll by. RuneScape is now 17, which means there’s just one more year to go before we can get served at the Poison Arrow – assuming Gielinor follows UK laws, of course. But for now, we’ll settle for the Lumbridge Cook’s Anniversary Cake, which you can eat once every three minutes (it never runs out) to replenish your life points - scaled according to your level.

We hear it’s so large that it covers the entirety of the Grand Exchange. Want a slice? Visit Party Pete in Falador up until the 11th of January.

If you thought January sales were just an IRL thing, you were sorely mistaken. Being the generous genie that he is, Solomon has launched a sale of his own. All of the following are currently half price:

Congratulations to our Winter Sweepstake winners sethsd259 (RS) and Tyboson (OSRS), who each win themselves a shiny new Razer Blade Pro laptop to ‘scape through 2018 with.

The skies have cleared and the snow has melted away in Prifddinas and the Grand Exchange, prompting Santa and his clockwork boy to pack their bags for the year. That’s right: the Christmas event is now over.

In other news, here are some patch note highlights:

You can read the full list of updates on the patch notes forum thread.

What did Rabid Jack say to the Soulgazer? Eye eye!

Tune in for our live streams every month to get in-game goodies!

Just connect your RuneScape account to your Twitch account and tune into one of our Tuesday, Friday or Sunday live streams to get your free stuff!

New year, new item for your Loot Chest, and this is one you’ve been waiting for – the amazing Loots Cape! 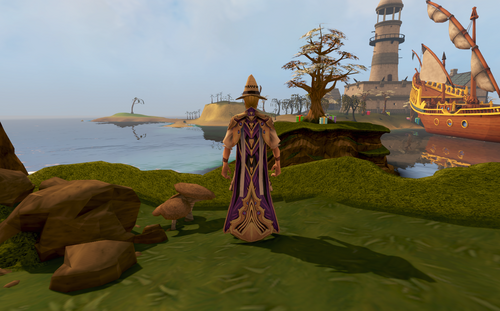 Each week we livestream Q&As, in-game events and more. Watch our streams and find out more information about our streams over on our Twitch channel. Check our YouTube channel too for recap videos of streams you may have missed.

We released the Year Ahead video on Friday, which included details of all the things you can expect from RuneScape this year. And boy was it a big list, and we know you have questions, so we’ll be taking them and explaining a bit more about all the updates in this livestream. Available on Twitch and YouTube - don’t miss out!

LootScape will be enabled for this stream.

Join our resident PvM expert with another mass this Sunday!

LootScape will be enabled for this stream.