Become a Soul Reaper in today's combat update from the RuneScape Ninja Team. Help Death restore balance to Gielinor by taking down some of its toughest bosses.

Read on for more information, or log in and head to Death's office now, via the portal just north of Draynor Village.

Live by the Sword 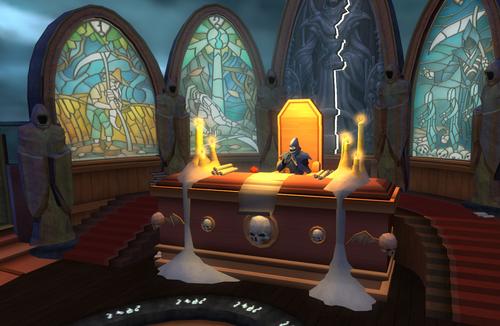 Once you reach Death's office - somewhat refurbished since the old death tutorial - he'll explain the situation in detail.

First, he'll hand you a grim gem - much like the enchanted gem you'd get from a slayer master.

Then, once per day, he'll offer you a boss-killing assignment that's achievable at your combat level. These range from the Giant Mole, Kalphite Queen and Barrows Brothers, all the way up to Rise of the Six, Araxxi and Vorago.

If you don't like the one he offers you, he'll give you an alternative, as long as you qualify for a different assignment.

Death will give you up to five alternatives per day, but each alternative offered after the first will reduce the reaper points you receive on completion by 25% - down to none on the fifth.

See the full list of assignments and their requirements on the wiki[help].

Cash In Your Chips

Completing assignments for Death earns you a modest amount of Slayer XP, and a sum of reaper points, which be used to purchase some smashing rewards:

Level 79+ crafters among you can create jewellery from the completed hydrix gem. At level 87 Magic, you can use the Level-6 Enchant spell to create the following:

These pieces of jewellery are degradable and cannot be repaired. They last for around 10 hours of combat before degrading to dust.

Level 80 Fletchers can also make hydrix bolt tips, which can be added to ascension bolts and - at level 90 Magic - enchanted to create ascendri bolts. This potent ammunition can grant you a 'deathmark' buff when you hit a target, which gives you 1% more adrenaline per hit while active.

See the wiki for full details of rewards[help].

Finally, there are a bunch of cool cosmetic rewards, granted once you've put down a certain number of the bosses included in Soul Reaper. These include two titles: 'the Reaper' and 'Final Boss' - and a full set of cosmetic overrides: the Vanquisher armour.

Visit the wiki to find out how these unlock[help]. Note that you don’t need to be on a Soul Reaper assignment for kills to count. We've been tracking this since the update on 22nd July, so you may have unlocked some already.

It's a grim job, but someone's got to do it. Gear up and get reaping, then join the discussion over on the forums.

See the patch notes for further details of today's updates.