Continue the story of the Sixth Age with Missing, Presumed Death. This quest is the first of an all-new series, featuring supernatural sleuthing; famous faces aplenty; scaled combat against the walking dead; full voice acting and a coffin-load of cool rewards suitable for all levels.

Missing, Presumed Death sets the scene for what will be one of the Sixth Age's core storylines. RuneScape lore fiends: you won't want to miss this! 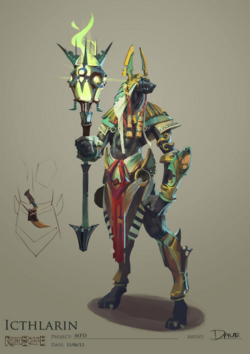 Brother Samwell's led a cloistered life, and it could never have prepared him for this.

He's the sole survivor of a horrific massacre - his fellow Saradominist monks lying dead around him. To make matters worse, their souls are trapped in the mortal world, unable to pass into the afterlife.

You'll team up with Icthlarin - god of the Underworld - to get to the bottom of this macabre mystery, searching for clues and questioning witnesses to deduce what has happened here. Who killed these defenceless monks? Why did they leave one alive? Where is Death, who should be freeing these souls from their fetters? And why does it feel like this is the start of something greater and more terrifying than the world has ever seen?

You'll travel far from the green grass of Gielinor, encountering allies and enemies - gods and mortals alike. While the quest has no entry requirements, quests that you have completed may feature, as will your actions during the Battle of Lumbridge, your choice of god emissary, and more.

We heartily recommend that you play Missing, Presumed Death right away. You won't miss any rewards or core content by doing so, and you'll enjoy an experience that's truly authentic to your character. Your past feats will be reflected and acknowledged throughout the quest's course, so more than any content before, this will be your adventure.

You'll explore a spectacular new area and face challenges of mind and body: solving riddles, traversing obstacles, and battling the walking dead. Combat scales to your level, so be sure to come equipped to fight. All of this is framed with lush new graphics, a magnificent musical score and full voice acting.

You Can Take it With You

You'll also receive an item which can return you to the new area, where you can claim high-level rewards and access post-quest content. These include hearty XP lamps for players of level 75 and above in Constitution, Thieving and a skill of your choice. There are also consumable items to help you blitz through Barrows runs in record time.

Missing, Presumed Death is the start of a story that will lie at the very core of the Sixth Age. Play it, enjoy it, and set the stage for RuneScape's future!

Mod Ollie and the RuneScape Team

How To Start Missing, Presumed Death

Speak to Brother Samwell at the crime scene west of Paterdomus Temple. Head north-east from Varrock to get there.

Behind The Scenes Video

Take a tour of Missing, Presumed Death with Mod Ollie in our recent Behind the Scenes video:

To help you experience the music of Missing, Presumed Death outside of the game, we've updated our SoundCloud website with a medley of songs from the quest:

See the patch notes for other updates released today.