Spring has sprung – the birds are singing and the sun is starting to shine – but there's still an unseasonal chill in the air. This could well be related to the ceremonial handing over of the 'Year', in which the Queen of Snow officially passes on the season to the Queen of Sunrise. For this year's ceremony, the queens have agreed to 'do battle' with evil holly and hawthorn trees. 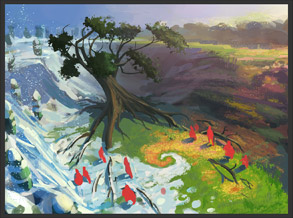 You will be able to choose your side in this traditional tussle – spring or winter – by chopping down the rival season's evil trees. All players will be able to chop down the wintry holly trees in order to help springtime emerge, while members will have the added option of felling hawthorn trees, to hold on to the bitter cold of winter. All of this tree chopping will be closely monitored by the Season Tree, the look of which will change between the seasons based on how many holly and hawthorn trees get chopped down.

Everyone who pitches in will earn this event's cosmetic holiday reward; however, members will get the added option of giving theirs a useful function, by charging it with the ability to locate and teleport to RuneScape's other evil trees. This works much like communing with a spirit tree, but can be done from anywhere. About a month after the Easter event is removed from the game, the items will lose their charge and become cosmetic.

During the Easter event, we'll be running a couple of competitions. From Friday 22 – Monday 25 April, the player who chops down the most holly and hawthorn trees will receive a RuneScape goody bag. The second competition is to guess at the total number of trees that will be felled over the course of the event. If you want to take part in either of these competitions, or the daily prize draws, you'll need to post on the Easter Tree Competitions thread, so we know to keep an eye on your tree killing skills.

Finally, although this tree chopping 'battle' is only meant to be symbolic, some of the two queens' entourage are taking this year's event a little bit too seriously. Let's just hope that nothing goes wrong... If anything were to happen, there will at least be plenty of adventurers around to set things right.

In honour of the alleged wedding of the King Black Dragon and the Kalphite Queen (and the very real wedding of Prince William and Kate Middleton), Diango will be selling some celebratory items[help] in his shop. Everyone is welcome to buy fireworks, firecrackers, bubble blowers, confetti and a souvenir mug. Members can also buy a bouquet of flowers.

We've reduced the produce cost of unlocking the spell rewards at Livid Farm[help] by roughly 20%, based on our post-release analysis and player feedback. This now matches our intended aims with this content in terms of effort vs reward. Players who have already unlocked any spells will receive the appropriate refund of produce, which they can then put towards any other spells they have yet to unlock and/or the wishes.

We’ve updated the sounds effects on the majority of NPCs in the free area of the game (as well as a handful in members' areas). The list is quite large, but includes skeletons, goblins, ghosts, dogs, dragons, and lesser, greater and black demons. We've also updated/added new environment sounds such as twittering birds and river sounds, as well as changed some other sounds such as for lighting fires and opening/closing doors.

We’ve slightly altered the way in which Rated Clan Wars kills are tallied, so as to avoid one clan repeatedly just killing the lowest-level players of an enemy clan to cheaply boost their kill count. Now, each time an enemy clanmate is killed, each subsequent kill of that clanmate will count as less than one kill. Therefore, if one clan repeatedly kills the same player over and over, they will be receiving diminishing returns. This should mean that clans are penalised less for the inclusion of more ‘vulnerable’ clanmates.

The graphical update to mining rocks we first released with the Lumbridge Swamp improvement has now been applied across the rest of RuneScape.