Battle the airut - vanguard of the feral goddess Tuska - in this level 92 Slayer update! You'll need top-end gear, high combat skills and quick wits if you want to survive against these multi-style monstrosities. Prevail, and you can get your hands on Kaigi's journal - a first-hand account of Tuska's destructive power; the mighty razorback gauntlets - level 90 melee power armour; or pieces of the XP-giving Tuska mask - the terrifying face of things to come.

Previously just an echo in the memories of a slain god, the airut have arrived. As cunning as they are strong, they're a match for all but the mightiest of Gielinor's heroes - and the only word on their lips is the name of their ancient swine goddess - Tuska.

Found in Kuradal's Dungeon and on the small peninsula south-west of Piscatoris, the airut are among the strongest opponents that can be encountered in the open world. You'll need at least level 92 Slayer to even scratch their tough hides. On top of that, you'll need very high combat stats to stand up to them (combat level 150 at least), and the best gear you have.

As you fight them, you'll need to keep an eye out for their stance. If an airut is up on its hind legs, it'll pummel you with melee attacks. If it's on all fours, though, it'll spit deadly ranged attacks your way. It'll switch its attack style occasionally, depending on how it's being attacked, so be sure to come equipped to deal with both types of damage.

An airut can also wind up for a lethal special attack, and you'll have to be on the ball to counter these. If you can hit the airut with either Flurry or Rapid Fire before the animation's over, you can stop the beast in its tracks and stun it for a short while. Otherwise, get ready to taste some pain! 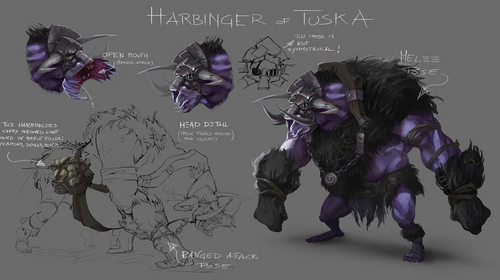 Among the many valuable drops that the airut can yield are pages of Kaigi's journal, which - when assembled - form an eyewitness account of the devastation Tuska caused to the Naragi homeworld. Collect all of these to form a full volume, to be stored in your player-owned house's bookshelf.

There are also six pieces of a Tuska mask to be collected. When assembled and worn for the first time, the mask will grant you a hog's helping of XP in a combat skill of your choice. You can then keep it as a cosmetic headpiece, or hand it in to a Slayer master for one Slayer point.

Airut bones are a guaranteed drop from each beast, and give better Prayer XP than dagannoth bones when buried.

Finally, there's a chance to pick up a pair of razorback gauntlets - level 90 power-type melee gloves that'll make you anything but ham-fisted.

Enjoy getting to grips with these porcine opponents. Fight hard and enjoy your rewards - but consider how you'll fare when Gielinor trembles under the tread of Tuska's mighty hooves.

How to face the Harbingers of Tuska: