This Halloween, the forces of good and evil will fight for control – it’s up to you to pick a side in this battle.

In this year’s Halloween content, you’ll be able to shift control of Varrock and Falador through decisions you make.

The world map will update live to denote which zones are fighting the good fight, and which have been corrupted by the influence of evil.

Of course, each camp needs its own J Mod to spearhead its campaign. That’s where the Community Team kicks in, so without any further ado...

In the blue corner, campaigning for peace, love and justice for all: Team Righteous, headed up by the angelic Mod Mike!

Opposite him in the red corner, dedicated to all things nefarious and despicable: Team Heinous, led by cackling fiend Mod Sabre!

Each J Mod will be leading their own army of minions. Mod Mike will be heading up the legion of holy defenders, while Mod Sabre will lead the infernal invader horde. Attacking these NPCs and taking them down affects the control of the area. Between the 23rd and 31st October, we’ll be monitoring who controls these cities very carefully, and come Halloween night we’ll announce whether it was good or evil who emerged victorious!

The J Mod leading the losing faction has to face a frightening forfeit – spending the night in a spooky building - and of course, we’ll be capturing every terrifying moment for you to enjoy at a later date!

Some of you have already contributed to each side’s cause – check out these awesome official campaign posters submitted by TokHaar (Heinous) and Teezkut (Righteous). 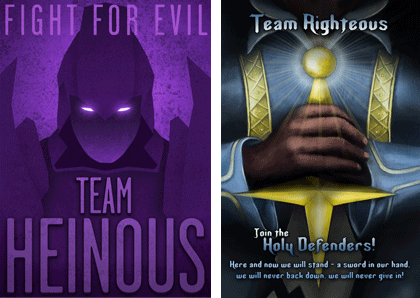 What’s more, each J Mod has made his own campaign video to sway you to his cause!

So, how do you decide which faction to side with and who faces the scary forfeit?

Firstly, today we’ve launched the campaign threads for both factions: Holy Defenders and Infernal Invaders, so post to support your chosen force.

Secondly, from now right until the 21st of October, you may experience some strange, supernatural occurrences. You’ll know when this happens as you’ll helplessly perform a zombie emote and the ground will shake under the influence of dark forces! If this happens to you, we want you to document the evidence and post videos on YouTube or send screenshots to [email protected]

Next week, the J Mods will start spawning their followers. The spawns will be in either Falador or Varrock on World 23, before moving onto a variety of other worlds.

One of the best ways to keep track of the battle is to keep an eye on the official RuneScape Twitter:@RuneScape, or by following the J Mods individually: @JagexMike and @JagexSabre. You can also jump into either of their Friends Chats: Mod Mike or Mod Sabre.

There’s even more to this event, but the dark forces at play mean it must remain a secret for now. Just remember: you choose your faction, you control the map zones, and the fate of two J Mods is in your hands!