It's been a fantastic competition and it seems that, all too soon, we've reached the end of the first stage of the GGVAs. It's a year that's seen the bar raised ever higher, making the choosing of finalists harder than ever.

Today is the last day of nominations which means finding out which three entrants will hoping to walk away with the GGVA for Best Video 2011.

As with the previous categories, we've selected finalists who all take alternative approaches to their film making. Whatever their approach be it machinima, live action or animation, they all stood out for their production values, their ideas and their execution. These are the films that for whatever reason, gave the judges a real kick out of watching them.

So, who are the finalists for the Best Video 2011?

The first finalist made a beautiful film with crisp, stylish animation and coupled this with an original sound track idea to tell their story. We've probably watched this about 30 times already and on a big TV with the sound turned up, we'll probably watch it 30 times more. Congratulations, Stoke; your video was awesome and we can't wait to meet you at RuneFest!

The second finalist is a RuneScape video veteran. He has a history of great RuneScape vids and is a regular contributor the video making community. His entry was very well made, had some great voice acting, had a funny story and even a live action story teller...even if he clearly had no idea what story he was telling. The accomplished machimina maker taking the second finalist spot is... BumBum007. Congratulations to you, sir; a great job indeed!

The third and final nominee in this category blew us away with what pretty much looked like a trailer for a movie. A live action entry like this clearly takes a lot of work to prepare, to script, to act and to edit. Its creators did a great job in all respects and also had some great special effects thrown in for good measure. It's a huge pleasure to announce that Nozferatu, you make up the trio of nominees for this year's Golden Gnome Video Awards. We doff our hats in your direction.

Check out the three finalists in action in this nominee video: 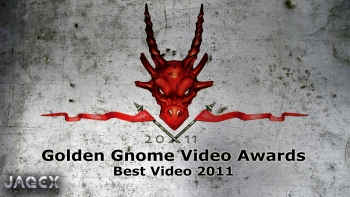 Congratulations to you all! All three finalists will be at RuneFest seeing which of them will pick up the Golden Gnome for Best Video 2011. Who that will be, however, is up to you; the RuneScape community. Voting starts soon and continues right up to the ceremony itself. More details on that over the next few days.

If you'd like to vote for finalists in the other GGVA categories, you'll need to be at the ceremony held at RuneFest 2011 in October. It's also the place to be if you like what you've seen or think you can do better as we'll be announcing the first details of the Golden Gnome Video Awards 2012. See you there!