I'm Mod Keeper, the Executive Producer for RuneScape. I wrote a blog post a few months ago to introduce myself, describe my work, and outline some upcoming content.

As we get to the end of our announced Roadmap from earlier this year, I want to share some more updates – especially as I know you've been eager to know what's coming up in RuneScape. 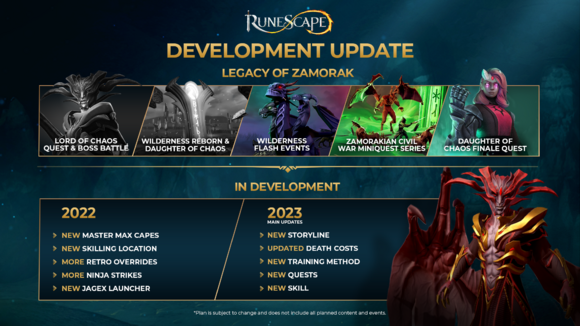 This summer marked the beginning of a new storyline, Legacy of Zamorak – and based on the packed leaderboards for the Zamorak Boss, plenty of you have already got involved!

Over the months ahead, we'll continue the narrative with the addition of some smaller content, including a quest which may or may not mark the start of a new adventure…

By the end of this year, a further addition will be made to The Wilderness which was recently reborn into a brand-new high risk PvM area for courageous players to venture into. This new content is called Wilderness Events and it's dropping in October – look for more information about it soon.

We'll also keep delivering those Quality-of-Life updates we know you love, including bringing some GameJam concepts that our talented designers worked on this June into the game. You might have noticed the recent graphical revision of free-to-play areas that Mods Blkwitch and Alex worked on, which is a fantastic example of what can be accomplished when people work on a project they are passionate about.

Seeing the new retro overrides that you've chosen to include in the game also makes me very happy. We plan to release them all in the coming months - and I want to thank you all for engaging so massively and making this project happen

You might ask me about our plans for 2023, and normally this is the part where I say it's too early to talk about that yet – but there's no harm in taking a sneak peek!

We've been working hard on the Death Cost and Grand Exchange Tax update, which we hoped to deliver before the end of the year. However, we want to make sure that this update addresses all of our players' concerns, so we've decided to spend a bit more time on it before it launches in early 2023.

We'll also see the launch of a new storyline that will be woven through our next phase of content releases. I don't want to spoil anything, but rest assured it'll be a great surprise!

Do you recall Prehistoric Potterington's 'Accidental' Fletching and Firemaking training from earlier this year? I certainly won't forget the sheer number of jokes and puns the development teams came up with! Although I can't guarantee the same degree of wit, I'm pleased to announce that we'll have another new training method coming in 2023 as well.

Speaking of skilling, I think it's also time for us to let you in on a big secret: for some months now, we've been working on RuneScape's next new skill. Yes, you heard that correctly! If all goes well, you'll be hearing much more about this very soon – so keep your eyes peeled!

So, that's where we stand on the development front. As you can see, we've got numerous exciting projects on the go, and we'll continue to listen to your feedback, update our tools and pipelines, and, of course, release new content, features and mechanics. There's loads more to come in 2023 than what we've spoken about here, so you can look forward to more announcements as the year progresses.

We've also heard your concerns, and we'd like to thank you all for your honest feedback. This Friday, September 23rd, we'd like to invite you to a Q&A session on Reddit. You should soon see a message from our Community Team with additional information – so if you have questions for us, be sure to check it out.

Finally, I'd like to talk about Fresh Start Worlds. We all think this event has so much potential, and our hope is that it brings more players than ever to the wonderful world of RuneScape. This is an experiment that has had so much love poured into it, and whatever happens, it's sure to teach us how best to continually grow the game.

Huge thanks to everyone who sent in their feedback and helped us find the good balance for this event. We can't wait to see your theory crafting, heroic victories, and player-made stories as you shape these Fresh Worlds. This is the magic of RuneScape, and it's going to make for a great end to the year.

Talk to you soon,