I'm Mod Orion, Content Developer for The Guardians. I've been spending a lot of my time over the past weeks working on a new system for the Arc - The Uncharted Isles.

As well as the big islands you already know of, there are a huge number of small archipelagos in the Wushanko Isles, and only a small number of them have ever been charted.

It has been my task to breathe life into these islands and make them a tangible destination on Gielinor – one that you could conceivably explore forever.

How do we implement this?

Creating a plethora of islands would have taken up far too much of our allotted development time, so writing a system that created the islands for us was definitely the way to go. Using carefully-clamped procedural generation, we have been able to generate billions of unique, varied islands.

Wait. How many islands?

Yep, billions. The islands are generated using random information as well as custom information from your player saved game. There are over 400,000 basic land mass configurations and shapes, alongside millions of variations of coastlines and shallow waters, alongside billions - soon to be trillions - of combinations of land décor, texturing and interactive objects.

This equates to an unfathomable amount of configurations and layouts. When you go adventuring in the Uncharted Isles, you'll always find somewhere new to explore.

How does it work?

We start by plotting some basic shapes on a grid. We then join the shapes up in a specific way to create a fully conjoined land mass. The shape of the land mass needs to be validated and small alterations might need to be made to ensure that we can work with it. 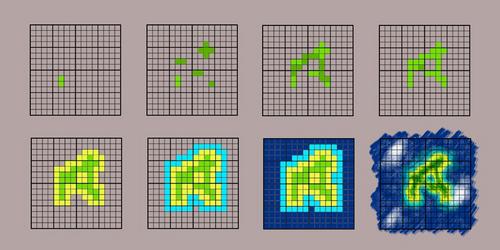 Once the central land mass has been finalized, we can give it a glorious, golden beach. We do this by traversing around the edge of the island shape and assigning it a special value. This special value determines the shape of the coastline at that point.

After the edges are done, making them look beautiful is the next step. NXT has a much more advanced water shader than the Java client, so we decided to implement another layer of coastline. Adding a 'second edge' of shallow water really makes the islands look like a tropical paradise, rather than just blobs of sand in the ocean. 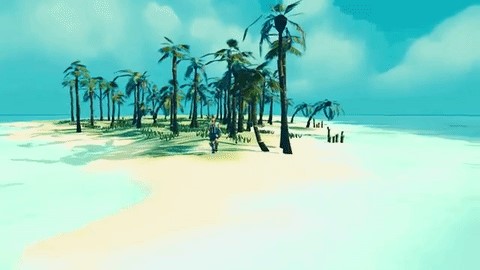 Once the shape and two layers of edging are completely computed, we can create the island! We do this by using several specially designed, manually crafted 'template' islands made by Mod Alex. They contain many variations of every type of tile. We stitch these tiles together (like a quilt!) to create the islands based on the data we have just calculated.

Here are some actual examples from our first prototype: 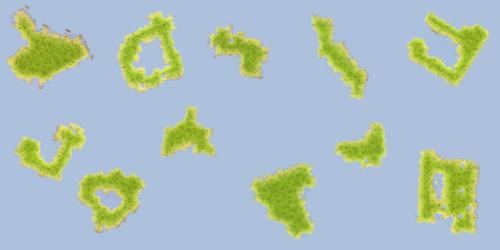 Using our current generation settings, they can either be very small, or increase to as much as three whole map squares in area! That's larger than many of the cities in Gielinor.

What can I do on these islands?

Without giving too much away...

Players will encounter flora and fauna unique to the the Arc and the Wushanko Isles and be able to interact with them in different ways.

Mod Stu has made a really cool contract system for exploring the islands and bringing back loot or slaying dangerous creatures, with ample rewards of course.

We have an event system planned too, so you might get a nice (or nasty) surprise when you arrive at an island.

There are many skilling and combat opportunities on the Uncharted Isles, as well as the chance to find spectacular treasures, super-rare resources, and even special items that you can take back to your own island.

We're really keen on giving you the choice to do as many cool things as possible on your island, whether it relates to skilling, combat, resource harvesting or simply making it a great place to soak up some summer rays.