From the RuneScape Wiki, the wiki for all things RuneScape
Jump to: navigation, search
This Developer Blog is copied verbatim from the RuneScape website. It is copyrighted by Jagex.
It is written by Mod John A and is dated 28 May 2009.
Coding and Writing

The implementation phase involves two main tasks. I've got to write the code to make everything work, and I've got to write all the in-game text. One of the exciting things about this job is that the same developer gets to do both of these tasks, whereas in other games companies they might be divided between different people.

You may know that RuneScape is written in Java - our company name, Jagex, stands for JAva Games EXperts. It may come as a surprise, then, that my job as a content developer involves no Java at all.

We write in a scripting language called RuneScript, which our Game Engine team has created specifically for making RuneScape content. The Java-based game engine then reads this RuneScript code and makes it all work. RuneScript is constantly being changed and expanded as we add new features to it to allow it to do new things.

Writing the in-game text (character dialogue, messages, item descriptions, etc) requires a different set of skills and techniques from writing the code. It is also difficult to know when it is good enough. A piece of code either works or doesn't work, but a piece of dialogue can be quite bad without being wrong in any definite way. It's a delicate balancing act conveying all the necessary information, while also being entertaining and dramatic, and doing all that in the smallest amount of text that I reasonably can.

Most of the time, I write dialogue straight into the code as I am coding it. For some of the more important passages, I plan them out first in a text file using a screenplay-like format. Whichever technique I use, it's important to then test the dialogue in the game to see how it looks.

One of the trickiest parts of writing is making sure that each character has their own voice. I have to be aware of that character's personality traits, how they are feeling, and their relationship to whoever they are talking to. This is especially tricky when dealing with existing characters such as Commander Veldaban, who already have some dialogue in the game. 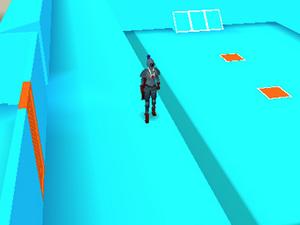 The new quest involves NPCs, objects and areas that the Graphics team haven't created yet. I need to be able to test the content I'm writing, so I'm using placeholder graphics to stand in for them. These placeholder graphics tend to be bright blue and blocky – they're designed to be clearly visible rather than to look good. They're a little like a 'blue screen' in movie-making.

Once I've got the quest working with these placeholders, the Graphics team will go through and replace them with the final graphics for the quest. In a later diary, I’ll be able to show screenshots that give a better idea of what the final quest will look like.

Right now, the 'bare bones' of the quest are just about playable using these placeholder graphics. It's ugly and obviously incomplete, but it basically works. My task now is to fill in all the gaps and add polish, which is a larger job than getting it working in the first place.

Last time, I told you that we were planning to graphically rework all dwarf NPCs, but I didn't know whether or not this rework would go live with the new quest. Since then, it has been decided that the dwarf graphical rework will not be going live with the quest; the quest will go live with old-style dwarf graphics, and the dwarf NPC rework will happen later. This means that the Graphics team now have time to rework every dwarf in the game, without having to worry about getting them ready in time for this quest.