While recovering from RuneFest and some epic Halloween parties, it’s nice to know there'll be some chunky updates to help me recover. Updates to take my mind off all the sweets and pumpkin pie I didn’t eat. Honest!

We're not done partying quite yet, although the turkeys of RuneScape have a different idea on how to celebrate Thanksgiving this year. Captain Turkerton and his turkey brethren are planning a protest against their species being put on the Thanksgiving menu for another year! If their demands aren’t met, a turkey invasion seems imminent, and they're prepared to gobble up the land. Can you find a peaceful solution? Can you stand the thought of Thanksgiving dinner without turkey?

We are continually re-working areas of RuneScape that we feel could do with a lick of paint. These improvements aren’t just about NPC models, environments and gameplay, though. They also relate to the main game screen itself, which we call the "top level interface".

The top level rework involves an overhaul of the interfaces that are used by players all the time. We are improving the style and functionality, and are introducing a new vibrant colour scheme. These changes include:

We’re undergoing a complete overhaul of the RuneScape website design, an example of which you can see in the screenshot below. The new design is a big departure from the current look and feel. We aim to capture the grand sense of adventure and exploration that RuneScape offers and bring that right out into the foundations of the site, while keeping all of the great features and information that you use on a day-to-day basis. 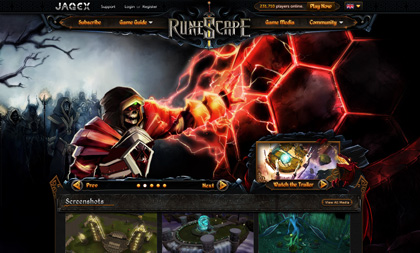 If, like myself, you’re a fan of the Slayer skill, you’ll be excited when you read the title of this update! As soon as you enter this new dungeon, you will find yourself immersed in some amazing, jaw-dropping scenery, but don’t look down, as this dungeon has a real sense of ‘depth’ to it.

Towards the end of the month, we’ll be launching the Polypore Dungeon. A ramokee has snuck into RuneScape and used her skinweaving powers to create a variety of horrific new monsters, many of which can only be killed by high-level slayers, and are best tackled with magic. Those who can defeat the ganodermic beasts (level 95 Slayer) may emerge with a unique kind of battlestaff and the materials to make incredibly protective mage armour. Elsewhere in the dungeon, there’ll be mage armour for lower-level fighters, and a very suspicious mushroom for PKers to eat.

The ramokee herself was originally destined from birth to serve her tribe as a healer, but she has rejected that destiny and abandoned her tribe. Now she sits enthroned in the depths of the cave, revelling in the freedom to use her skinweaving powers to indulge her own whims and curiosity. Along with the skinweaver, the dungeon is home to a strange little man with a sad story. He sells bizarre garments that form the basis of the mage armour.

If you’ve seen the bottom of our newest Lores and Histories story, you’ll already know the title of November’s quest: One Piercing Note. Legend has it that, during the God Wars, there lived a holy woman named Elspeth whose voice was so perfect that no demon could bear to hear it. In the present age, a group of Saradominist holy women found Elspeth’s remains on a remote desert plateau and set up an abbey in her memory. Within the abbey’s sand-blasted walls the Sisters of Saint Elspeth devote their lives to prayer and sacred music.

Now there has been a murder in the abbey, and Abbess Benita is praying for an adventurer to investigate. To complicate matters, a wandering troubadour has set up camp outside the abbey, despite the order’s rules forbidding secular music. It’s up to you to uncover the abbey’s secrets and find the killer.

As befitting a quest involving a troubadour and a holy choir, sound and music play a prominent role in One Piercing Note. The music is woven into the story, and includes recordings of real musicians and singers. In addition, in a first for RuneScape, all NPC dialogue will be voice-acted. So, turn your speakers on and enjoy our latest all-singing, all-dancing quest!

Requirements for One Piercing Note:

Last, but not least, we’re planning on reworking large areas of the Wilderness graphics. These include:

Visit our media page for some sneak preview screenshots!