First up, we’re making some changes to resource gathering within clan citadels. After extensive discussion with our most proficient clans, it was clear that you needed more tools and more rewards when investing precious adventuring time in your citadel. So, from this month, you’ll be able to gain access to new clan fealty capes, which will earn you more XP when contributing to your clan’s resources, granting weekly XP lamps to the truly diligent. We’ve also made a series of improvements to the skill plots themselves and added some admin tools that clan leaders can use to keep an eye on how their clan is contributing to the stockpiles.

Yes, Bonus XP Weekend returns on the 16th of March 2012, so start filling your vials, carving your planks and prepping the contents of your bank for a weekend-long XP fest. Don’t forget that your XP bonus affects almost all the repeatable, skill-based content in the game, is game-time-limited, and starts at a whopping 2.7x your normal XP rates! So, for example, if you’re used to getting 100 XP for fishing swordies you’ll actually gain 270xp for a single fish. While the rate will slowly go down over about 8 hours, you’ll receive a bonus for any skill-based activity you perform over the weekend. For further information on previous XP weekends, click here.

It’s our biggest equipment rework ever, featuring over 200 visually improved pieces of combat equipment covering a whole range of levels and combat styles for both male and female combatants! If you wear armour or wield a shield while engaging with your enemies, it’s probably being updated:

As part of our ongoing equipment rework, we’ve really tried to show the difference in defensive quality as the skill requirements rise. As seen in the Troll Warzone update, each set has an individual style, but it also adds genuine variety to the various trimmed, blessed and minigame-specific gear you’ll encounter while exploring the many facets of the game. Even the god-aligned equipment features its own unique touches, often influenced by your feedback in the forums, and from RuneFest, where we first showcased the amazing images of the improved dragon gear. 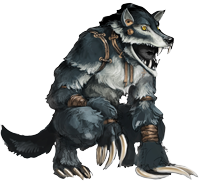 Our newest loyalty batch offers a wealth of new rewards, including tier 4 versions of existing auras, a new set of Guthix-themed winged auras and several new emotes, including one upgrade option. Unleash your ’inner power’ or take your ROFL to new heights in the ROFLcopter! We’re also introducing a new aura that speeds up special attack recovery and new ’race’ costumes to let you look more like an elf or a werewolf. ROAR! 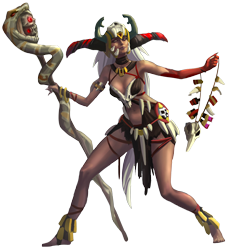 Mami Rimba (friend of Papa Mambo) has set up shop just outside Edgeville. She’s every bit as mad as Papa but has delved into some seriously dark mojo. She’s tapped into the power of the bloodwood tree, which grows only in places of bloodshed, such as the Wilderness, to craft a bolt that punishes mages. The bolts must be fired from a rune or chaotic crossbow, and they have powerful stats (125 ranged strength – with a Ranged requirement of 80). When used in PVP against those of a magical persuasion, they have additional benefits, including the ability to target specific areas of the body, with mighty special attacks, depending on whether you're aiming at the head, torso or legs!

To make these bolts, you must purchase bolt tips from Mami and head into one of the blood-soaked regions where a bloodwood tree can be found. Fletching of the bolts must be performed at the tree and will require 85 Woodcutting and 93 Fletching.

This month, our short green friends are going to receive a grand makeover, courtesy of Mod GFX and his team. All the gnome characters, chat heads and environments are being reworked, including both the Grand Tree and the Stronghold. Some awesome new lighting effects and stylised wooden architecture bring a fresh look to the arboreal domains of Bolren and Narnode Shareen. Getting everything upgraded has been gnome mean feat!

Transport and Navigation (Free and Members)

No runes? No problem!

A brand new Transport & Navigation system will be added this month, designed to make Gielinor more easily navigable via magical gatestones. This ancient and mystical system will allow travel around a wide range of popular RuneScape cities, towns and locations including Edgeville and Lunar Isle.

While there are no real level requirements to use the system, each gatestone has to be discovered in order to be activated and can be accessed via a new 'home teleport' menu from the Home Teleport spell slot.

Finally this month, we’re introducing our latest Task Set, this time based in the dark, desolate lands of Morytania. You’ll be able to complete sets of Tasks which range from Easy to Elite levels of difficulty, which will encourage you to make snelms, activate medallions, slay barrow wights, and brew your own prayer renewal potions.

Tasks are all well and good, but it’s the rewards - including new leg armour - that really interest a fearless traveller. Fancy halving your prayer drain while in the Barrows? How about increasing your trekking rewards and your mushroom yields from patches? All that plus more, and over 150k in XP lamps! For those who are really keen, we’ll even add an Early Bird Bonus (worth 15k) for anyone who completes the Easy and Medium lists within the first 2 weeks of launch.

Behind the scenes is a sneak peek at the planned game updates which we hope to launch in the coming month.

This is, however, only a plan, not a promise that a particular update will be released in a particular way or at a particular time. To get you the highest quality updates as quickly as possible, we usually keep on tweaking and testing right up until the moment before release, so, sometimes, things change or take a bit longer than expected. We aren’t afraid to change our plan if necessary, as we will never launch an update before it is ready.