Join us as we kick start the festive season with the latest Behind the Scenes, packed full of gift-wrapped updates for members and free-players alike. Feast your eye on a cyclossus, dragon defenders, brand new hit splats, damage soaking and a huge new piece of seasonal Christmas content set in Daemonheim!

On the top floor of the Warriors' Guild, Kamfreena awaits the latest batch of adventurers strong enough to join the guild's elite ranks. Of course, tales of the rare defender weapons that her 'pet' cyclopes hold are legendary, but new stories are beginning to emerge surrounding the cyclossus, the toughest, meanest and most dangerous one-eyed hombre east of White Wolf Mountain.

More than just a ferocious temper lies in wait for those brave warriors, for a new 'eyeball-orientated' costume mask and, of course, the dragon defender itself should soon be available to those who step into the ring. Eager to let bloodthirsty combatants into the fray, the guild's other custodians are planning to adjust many of the challenges found within the guild and offer an additional reward to anyone who attempts them all.

We have recognised an imbalance between the potential damage per minute (DPM) and damage capacity (DC) of higher-level players. The rate of damage that you can deal at high levels is far greater than the rate of damage you can withstand, especially when in a multiplayer environment. NPCs and boss monsters can deal with this issue because their life points can reach far beyond 990, but players' life points cannot. Dealing with this imbalance will be done in several ways, with the first of those ways being introduced this month in the form of damage soaking.

In what will be a huge addition to the Defence skill and defensive equipment, we're aiming to add damage soaking stats (currently only applied to the chaotic, eagle-eye and farseer kiteshields) to the majority of head, body, leg and shield slot equipment. Damage soaking will help reduce all incoming damage values over 200 life points, with higher grades of equipment offering a greater percentage of 'soak', and with members' equipment offering the greatest percentage of all.

We'll also looking forward to releasing a brand new set of hit splats to give you better information about any combat you're in. We’ve had some great conversations in the forums after the dev blog about hit splats a few months ago and have changed our approach thanks to your excellent feedback. Here’s a screenshot of what they will look like: 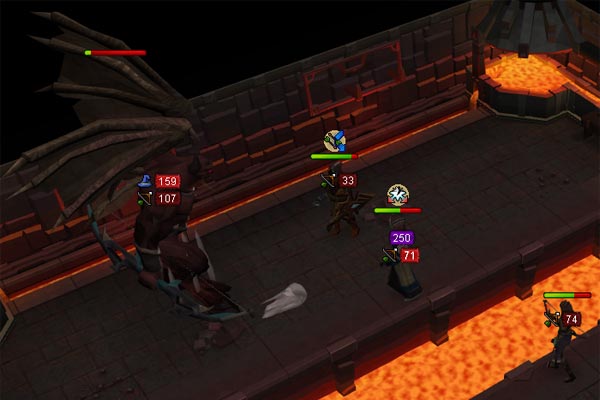 Once launched, you’ll be able to:

For this year's yuletide celebrations, we're hoping it will be a very merry Fremmy Christmas, as we get invited to Daemonheim for a traditionally non-traditional RuneScape holiday event. Join us for seal sliding, icicle lighting, snow angels and much, much more as the Fremennik try to bring Christmas cheer to the dungeons of Daemonheim.

If you're successful, you’ll be invited to attend the Heimland Games for snowball fighting, snowman decorations, ice skating and even more seal sliding! Arp, arp! A multitude of costume rewards and a shiny new emote are just waiting to be yours, but remember: a heim crab is for life, not just for Christmas!

We will be making some adjustments to the skill targets update we added last month, adding the 'percentage complete' number to the mouse-over information. We are also releasing the new-look dragon scimitar, as voted for by you in the Guaranteed Content Poll.

Finally, a Merry Christmas from Jagex and the RuneScape team! Have fun!