The Order of Ascension (members only)

Deep beneath the Feldip Hills, the Order of Ascension muster in an all-new, ranged-focused slayer dungeon, coming this month!

This huge force of misguided Guthixians have taken some dramatic action since their god's death - including capturing locals for dark, mysterious purposes - and they must be stopped before their attention turns to the more populated cities of Gielinor.

These creatures were once humans themselves, but now they're something else entirely. They exude magic, and can only be fought by the strongest of rangers. They have huge strength in number and comprise of many types: including the nimble gladii, healing capsarii, shielded scutarii, and the rorarii, who hunt in packs. Each has unique abilities and requires different strategies to take down, as well as level 81 Slayer.

The legiones are by far the most powerful of the Ascended: six powerful mages, their abilities honed over hundreds of years; their minds linked together by a powerful enchantment. The order is a tight-knit community, fanatically loyal to each other, and the legiones are the unquestioned leaders.

Each of the legiones will stand as a unique boss monster, with subtly different mechanics from the others. In order to fight these, you'll need a Slayer level of 95 (or a co-op Slayer buddy with that level) and a unique keystone to access each one - dropped by other Order of Ascension members.

For those brave enough to face the legiones, very special rewards await. Not only will their drops be extremely profitable, but they will also drop one of 6 Ascension signets, used to create the level 90 Ascension crossbow! This crossbow is the only one that can use the powerful new Ascension bolts, found through scouring the monastery for components and made by level 90 fletchers.

The story of the Ascended is a rich and interesting one, and the full story of their past can be found in collectable lore book pages, which will be scattered throughout their home. 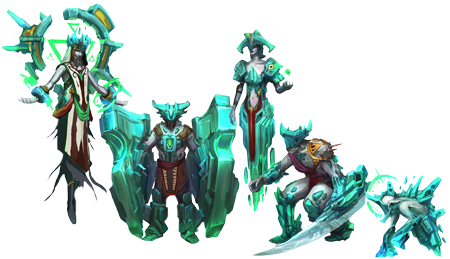 The Crystal Triskellion (members only)

The crystal triskellion is a brand new key, shattered into three parts by forces unknown. A new, secret treasure location will be added to the game world unlockable by players who piece together the three parts of the key, found through fighting high-level slayer targets and engaging with a variety of high- level skill content.

The loot found within each chest will be pretty spectacular. Most importantly though, it can also contain some brand new hybrid gear, known as dragonstone armour.

The key and its parts are untradeable and members-only, so this fine gear will only be found by those players able to collect the pieces themselves. Free players will be interested to hear, though, that the dragonstone armour will be available to them to buy from willing players or the Grand Exchange.

Our community team are really pulling out the stops in June and beyond - this is your year, after all, and they're the guys and gals getting you involved. Watch out for their weekly Community Round-Up news post for more info!

If you're a video maker, be sure to check out our RuneScape Journey competition for a chance to win lifetime membership, and other amazing prizes.

Also, now that the New Interface System is in beta and open to all members, we want to see what you can do. Keep an eye out for details of our Your Interface competition - coming soon!

A Note from Mod Mark

With the imminent launch of RS3 (coming this summer) the team are working hard on a huge range of updates, all thematically and functionally linked into the 6th Age of RuneScape. It's going to be an amazing summer of content, but it means that the content launching this month is in flux. At the end of every BTS, we always say "If it's not awesome we won't launch it" - that's very much the case this month.

That's why I am only listing the Order of Ascension and Crystal Triskelion updates here, since those are the ones we will certainly be delivering this month. We have a swathe of other updates in development, and the other weeks will contain awesome content, but right now I don't want to make promises as to what that content will be. To give you an idea of some of the content we are working on right now, check out the list below (in no particular order):

Don't forget to check out our RuneScape Beta Programme - it's your game, and we need your feedback!