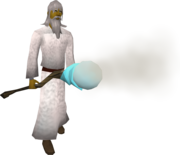 Ungadulu is a shaman located in the Fire Octagram, inside the Kharazi Dungeon. He is possessed by Nezikchened during the Legends' Quest. Before the player uses the Book of Binding on him, his combat level is 77, and his combat level is 1 after that. However, Ungadulu cannot be attacked. If you try to, he will throw you out of the Octagram, hitting you for between 41 and 98 damage. He also cannot be damaged by Dominion mines, the Aftershock perk, AoE abilities, a combat familiar, nor any cannon variant.

After the quest, if players attempt to talk to him, nothing happens. If you have a Dark Dagger or Glowing Dagger in your inventory however, he will. By doing so, players may receive 3 more Yommi tree seeds. Players may also receive another Holy Force Spell by using a Glowing Dagger on him.

Transcripts Ungadulu is the author or co-author of: