From the RuneScape Wiki, the wiki for all things RuneScape
Jump to navigation Jump to search
Not to be confused with Tutorial Island (Beneath Cursed Tides). 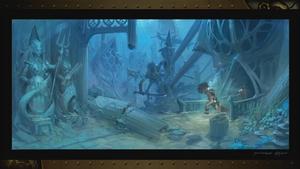 The Underwater city is an ancient city, situated on the bottom of one of Gielinor's many oceans. It was mentioned by Guthix in Issue 24 of the God letters, according to whom "the city beneath the waves" has been submerged for several centuries, the outside world has all but forgotten it subsequently with most people consider it nothing but a myth, and there are people working to re-establish access between it and the outside world.[1] In a livestream in November 2012 it was hinted that the pirate quest series may involve the underwater city, as well as Captain Rabid Jack.[source needed] Mi-Gor states during The Great Brain Robbery that Rabid Jack is currently based in an underwater location, possibly referring to the city.[2]

An underwater city is referenced in a nightmare the player character may have if they fall asleep during the Coeden section of The Light Within. It is described as consisting of buildings made up of obsidian pillars and slabs that are subtly wrong in proportion, and being full of "myriad black, stone hands".[3] The hermit crab pet also claims to have been in a wet area full of "giant stone hands" at some point previously.[4]

The underwater city is briefly referenced in conversation with Socky McGee, where the sock puppet claims that the player character raised the city back up to land.[5]