In the early years the Underground Pass was a trading route used by the Elves. Later, when Prifddinas came under control of the evil elves, Iban, the self-proclaimed son of Zamorak, took control of the Pass. The Pass was known to corrupt anyone who entered. Although it was believed that this was due to Iban, the player finds out in Plague's End that the Dark Lord, a part of Seren trapped in the Temple of Light, was actually the responsibly entity.[1] During the Underground Pass quest, the adventurer is tasked with killing Iban. After that, the Pass becomes property of King Lathas from East Ardougne. 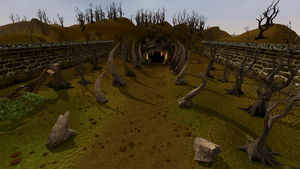 The entrance to the Underground Pass

Getting through the Underground Pass[edit | edit source] 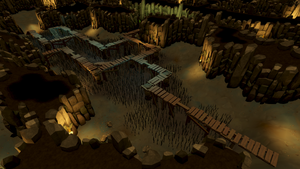 A pit full of spikes within the Underground Pass

The following only contains information on how to get through the pass after the quest is done.

The player will not be able to enter Iban's Temple and the Elven lands until the player has spoken to King Lathas at the start of Regicide. The player's quest journal will mention about assassinating his brother if they have talked to him. For using the pass, it is recommended to have a high agility level. A Thieving level of 50 is another advantage.

These items are needed:

These steps are to be followed to cross the pass: 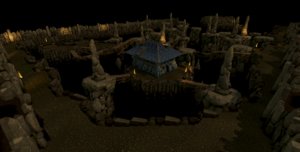 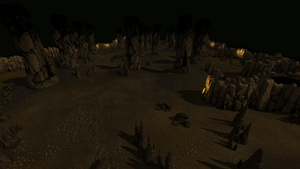 The bottom of the chasm

The update history project is a work-in-progress – not all updates to this topic may be covered below. See here for how to help out!
Retrieved from ‘https://runescape.wiki/w/Underground_Pass_(dungeon)?oldid=34958309’
Categories:
Hidden categories: