From the RuneScape Wiki, the wiki for all things RuneScape
(Redirected from Undead trolls)
Jump to: navigation, search 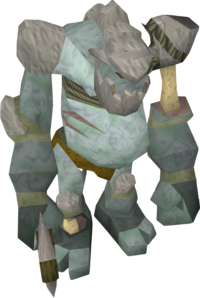 An undead troll being summoned by an undead mage.

The Undead troll is an undead version of a troll. Being undead, they are vulnerable to the effects of a Salve amulet. They can be also killed for a troll slayer assignment. They can be found in Lucien's camp and are mixed with Elite Black Knights, who are aggressive unless the player is wearing Dagon'hai robes or Elite black armour. To access Lucien's camp, you need to have at least made some progress in the While Guthix Sleeps quest. The undead trolls wielding pickaxes are never aggressive, while the unarmed trolls are aggressive in the same fashion as the Elite Black Knights.

It is time consuming to get to Lucien's camp. While the undead trolls's drops are moderately profitable, there are no unique or very valuable drops, so few players go there to kill them. Although blue charms are their most common charm drop, on average they only drop a charm every ten kills, making them very bad for charm collecting. Some players on slayer assignments for 'trolls' sometimes, for a change of pace, attack these trolls rather than Mountain trolls, but others contend Ice trolls are as good for drops and easier to reach and slay.

Since undead trolls are very far from a bank and difficult to access, some form of long-term healing is advised, such as a familiar or the Bones to Peaches spell for longer stays. Players who choose to heal with Guthan's set must be careful, since all the knights and unarmed trolls become aggressive upon equipping the armour.

The undead trolls live in Lucien's camp. To access this camp, players need to go to Surok's room at the end of the Black Knights' Catacombs, beneath the Black Knights' Fortress. They then need to activate the strange teleorb while having in inventory a death rune and a law rune, which are consumed.