Undead trees are located in the front yard and outskirts of Draynor Manor. They are smaller than regular dead trees and have fewer branches. Undead trees can also be identified by their yellow name, whereas a regular dead tree has a blue name. It is possible to receive a bird's nest from an undead tree; however, this nest will always be empty.

Regular hatchets are unable to cut undead trees. These trees play a small role in the Animal Magnetism quest, in which the player creates a blessed hatchet to cut them and get undead twigs for Ava. Cutting undead twigs gives 5 Woodcutting experience and requires a Slayer level of 18.

When a player walks past an undead tree, the tree will attack them with melee, inflicting a maximum of about 80 damage. Players cannot retaliate against these trees, so it is best to simply step away.

The Witch in the Black Knights' Fortress used to say that the trees' behaviours are due to the magical properties of the soil they grow in. The soil is also known for making the manor's cabbages tastier. 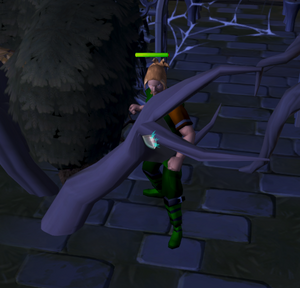