From the RuneScape Wiki, the wiki for all things RuneScape
(Redirected from Uncharted islands)
Jump to: navigation, search 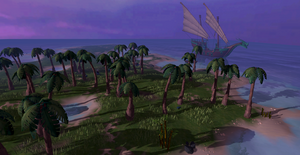 The Uncharted Isles are a procedurally generated island exploration system that offers member players the ability to discover new, unmapped islands in The Arc region. The islands are high-level skilling destinations for Fishing, Woodcutting, Divination, Farming, Hunter and Mining. 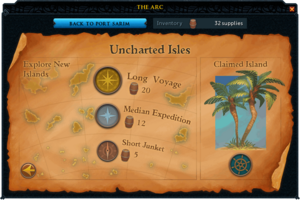 The Travelling merchant random event from Deep Sea Fishing can sell special maps for 800,000 coins that leads to an island with 4-6 special resources.

Orokami spirits may be found on the Uncharted Isles, caught for a variety of rewards using the Hunter skill. On long voyages, there is roughly a 37.5% chance that players will find a wandering orokami.[source needed] On large voyage isles there is an average of two orokami spawns available to spawn, making the chance to find a wandering orokami spirit 61% each large voyage.

The Uncharted Isles are home to a number of special resources; these resources are depleted after a player has made a number of successful harvests from them or after a set amount of time has passed. If the player claims an isle, any special resources found on that isle will persist for all continued visits, becoming harvestable again after 00:00 (UTC) if depleted. This is indicated with the message The resources on your claimed island have been replenished. if the player is already logged in-game. This is a soft reset and the player does not need to log out in order for the resources to replenish.

However, the deep sea map can generate an island with up to six special resources. This can be obtained from fishing at the platform, or paying 800,000 coins when the travelling merchant docks.

The Uncharted Isles can contain alaea crablets, which can be mined for their alaea salt at level 97 Mining. Each crablet can be mined for a total of 40 Alaea sea salt. Each colony consists of 5

The Uncharted Isles can contain dead moais whose heads are bleeding out the island's anima, creating Ancestral energy springs, requiring level 95 Divination to siphon from. 75 ancestral energy can be obtained from each spring, and there are four springs for a total of 300 ancestral energy.

The Uncharted Isles can contain Golden Bamboo, requiring level 96 Woodcutting to chop. A golden bamboo tree yields 100 golden bamboo (giving 65,550 Woodcutting experience) before depleting. A message will notify the player upon its depletion: The bamboo plant has been exhausted for today

When depleted, the cluster has no more visible mushrooms, and a message will notify the player upon its depletion: The mushrooms have been exhausted for today.

The Uncharted Isles can contain ornate tortles, which can be hunted at level 96 Hunter with a tortle trap, which harmlessly holds them in place to allow for the collection of shell chippings. The chippings can be crafted into a bowl at level 92 Crafting. An ornate tortle colony yields 200–215 shiny shell chippings (giving up to 340,775 Hunter experience) before depleting. A message will notify the player upon its depletion: The tortles are disgruntled by your traps and begin to disperse from the area.

The Uncharted Isles can contain schools of wobbegong, requiring level 96 Fishing to catch. They are able to be cooked into wobbegong oil at level 96 Cooking, consuming two wobbegongs per oil. A fishing spot yields 100 wobbegong (giving 61,250 Fishing experience) before depleting. A message will notify the player upon its depletion: The fishing spot has been exhausted for today. The wobbegongs are wobbegone. 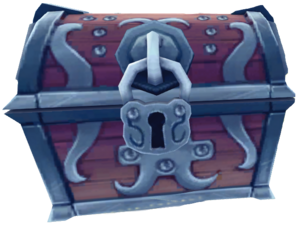 Items are often found washed ashore the coasts of Uncharted Isles. These items will persist as long as the player remains on the isle, and can be picked up or looted. As such, pick all of them up and bank them before starting on other resources. When revisiting a claimed island, new resources will have washed ashore.

After completing the Flag Fall miniquest, players gain the ability to purchase claim island flags which can be used to claim an Uncharted Isle. Once the player finds a suitable island for themselves, they may plant the flag on the island, with a confirmation message being given before being planted. The island will not be lost upon leaving, and can be revisited at the cost of three supplies regardless of its size.

Since islands cannot be claimed until Flag Fall is completed, it is advised to go on Short Junkets until five driftwood can be collected and given to Boni.

Bamboo stumps on a new island are decorative and will never grow, unlike their normal counterparts which grow back the next day after being cut.

For players who wish to produce and sell shark soups, an island with alaea crablets, ornate tortles, and a school of wobbegong would be the ideal choice of resources; bundles of bamboo can be easily crafted on Waiko from the ample supply of bamboo found there, and Sliced mushrooms can be obtained via mushrooms from Goshima, or The Islands That Once Were Turtles. Alternatively, claiming an island with several groups of alaea crablets and access to ancestral energy would allow a player to transmute resources to the type desired.