Uncharged Summoning pouches were introduced as part of a Summoning skill rework on 3 December 2013. Players could craft unfinished summoning pouches anywhere in the world, and then infuse them at an obelisk to make them usable. This update was not well received, and the change was reverted 2 weeks later.

Any leftover uncharged pouches may still be converted for experience. Clicking one in your inventory prompts a warning message saying: "this item no longer has use. Convert it and claim the xp contained within?". Choosing 'Yes' will convert all pouches in your inventory into Summoning experience. 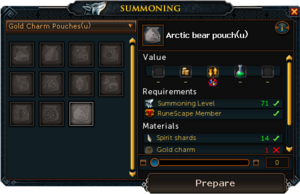 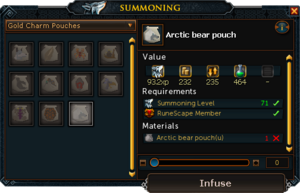 Uncharged Summoning pouches were created by infusing the essence of a creature known as a familiar with the following items:

To create the uncharged Summoning pouch, once you have the appropriate components in your inventory, click on the empty Summoning pouch and the Summoning interface appears.

Spirit gems, which are dropped by all monsters that drop a single charm and could be received from the Squeal of Fortune, functioned similarly to Runecrafting pouches and stored uncharged summoning pouches before an update. They now give a chance of saving a charm when making familiar pouches. Uncharged pouches did not have to be withdrawn from the gem to be imbued, although there was a glitch that made them not give experience while they were stored in the gem before the update was reverted.

This information has been compiled as part of the update history project. Some updates may not be included - see here for how to help out!
Retrieved from ‘https://runescape.wiki/w/Uncharged_Summoning_pouch?oldid=35688440’
Categories:
Hidden category: