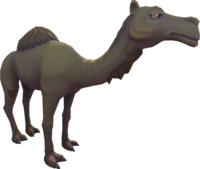 Ugthanki (Camelus horribleus) are a variety of vicious camel, which can be found in the Kharidian Desert, located south of Shantay Pass. Their name is derived from the that of Akthanakos, a camel-headed Mahjarrat that trained them to fight. They are aggressive, so players with low life points should keep away from them.

While they can be spoken to with a camulet, their aggressive nature means that they may attack players who do so.

Ugthanki are the only creatures that drop ugthanki meat, which is used to make ugthanki kebabs.