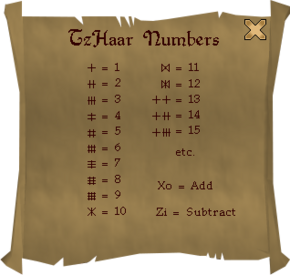 The note in the book explaining the TzHaar numbering system.

TzHaar tourist guide is a book required in the TokTz-Ket-Dill quest. It contains an explanation of the TzHaar language, as well as a note stuck to the front inside cover explaining the TzHaar numbering system. It can be found in the bookcase of a Player-owned house after the quest is completed, with the note still inside it. It cannot be returned to the library after the quest.

The following text is transcluded from Transcript:TzHaar Tourist Guide.
Introduction

So, you plan on taking a vacation to the wonderful TzHaar city, deep within the Karamja volcano? Then this book is perfect for you! You will learn some useful TzHaar phrases, some dos and don'ts among the TzHaar, how to best reach your destination, how to count in TzHaar, and about popular tourist attractions.

Section 1: Getting to the TzHaar City

Finding your way to this over-tropical paradise is simple. The first thing you need to do is get to Karamja. Regular boat rides will take you directly from Port Sarim to the eastern peninsula of the island, or from East Ardougne to Brimhaven. From there, head straight for the Karamja volcano. Can't find your way? Follow a very simple landmark: a cloud of beautiful black smoke – you can't miss it!

Once you've reached the crater, a large towering spiky gateway marks the entrance to the TzHaar City. Enter and you will have reached your destination! Hours of fun with tourist attractions, sight-seeing, and socialising with the locals and other tourists await you. Thousands of people from all over Gielinor visit this glorious city every day, so you will never be alone!

Disclaimer: the author of this tourist guide takes no responsibility for any 'mishaps' on the way to the TzHaar city, such as death by pirates or scorpions.

Once inside the TzHaar city the attractions and sights to experience are nearly endless. Beautiful rivers flow straight through the city, and make for perfect scenery if you want to go for a walk with a special someone. You can also get a first-hand look at TzHaar craftsmen hard at work, forging wonderful tools out of purest obsidian. Or why not admire the marvelous[sic] city guards?

You might think, 'but what if I want to be more active?' Worry not! The TzHaar city also contains the two great attractions known as the Play Pit* and Play Cave*. In the Play Pit*, tourists from around Gielinor can compete against each other for fine prizes. The Play Cave* is a fantastic attraction where you will be able to get up close and personal with the wildlife of the volcano, without the big annoying fences you find in places like the Ardougne Zoo.

* The TzHaar names of these attractions are slightly different. Namely, Fight Cave and Fight Pit. The principal[sic], however, remains the same!

Disclaimer: The author of this tourist guide takes no responsibility for any 'mishaps' such as death by lava, TzHaar guards, other tourists or highly aggressive Play Cave monsters.

If you enter the Play Cave, do not feed the animals! (Or their taste for human flesh may grow even stronger.)

If you enter the Play Pit, try to stay away from other tourists! (They are there to kill you.)

If you take walks along the beautiful rivers, don't go for a swim! (Lava is not good for your skin.)

If you go to watch the city guards, don't insult or tease them! (Their clubs hit hard and won't stop hitting until you're dead.)

The TzHaar are usually happy to speak your own language, but sometimes it can prove useful to know parts of their language. This section of the tourist guide is here for you to quickly grasp the foundation of their beautiful language.

The words are typically short and always end with a consonant, even though it's not always fully pronounced. What the words mean depends on context, and don't always have a set translation.

These basic words can then be combined into more complex words. Here follows a list of examples.

JalYt – Human.
TokKul – TzHaar currency, cut from the purest obsidian.
TzHaar – The TzHaar species as a whole.
Tz-Kih – A species of fairly common fiery bats living within the volcano.

TokTz – Obsidian. All of the obsidian they use is gained from their own volcano. Sometimes they even gain obsidian out of their dead, as a way of passing their life force on to new parts of TzHaar society.

Tok-Ket – A block of stone. The kind typically used in TzHaar constructions are sourced from their own mines.

TokJal-Hurt – A plank. The kind typically used in TzHaar constructions are oak planks, treated by the TzHaar in a specific manner to make them resistant to fire.

TokYt-Hurt – Metal. The kind typically used in TzHaar construction is mithril or adamantite, forged in their magma furnaces.

The TzHaar count in a slightly different way from humans. The basic for their counting system comes from their anatomy: They have four arms with three fingers on each, and this is reflected both by the base of twelve as well as how the numbers are written. The human counting system has a base of ten, which means that we count from 0 to 9 before adding on a second digit, making 10. The TzHaar count from 1 to 12 before adding on the second digit. 0 is nothing to a TzHaar, and thus not included.

All TzHaar numbers are collections of lines. The numbers are based on their four arms and three fingers on each arm, and what is necessary in order to count to a certain number is what the lines represent. For every hand that a TzHaar needs to use, one horizontal line is added. For every finger on the last hand that needs to be used, one vertical line is added. However, if all four hands are necessary, they make an X shape instead of four horizontal lines.

For an example, number 5 in TzHaar would need two hands and two fingers on the last hand. So this number would be written with two horizontal and two vertical lines.

This information has been compiled as part of the update history project. Some updates may not be included - see here for how to help out!
Retrieved from ‘https://runescape.wiki/w/TzHaar_Tourist_Guide?oldid=35930350’
Categories:
Hidden category: