The TzekHaar Front is the fourth front of the Elder God Wars Dungeon, which was released on 25 October 2021. The front has no requirements to access; however, the completion of Sliske's Endgame, Desperate Measures and City of Senntisten, as well as their prerequisites, is recommended for a better understanding of the story, as the front is considered the next installment in the ongoing Elder God Wars narrative. The Shard of Erebus stops the enemies from being aggressive, and pontifex shadow ring provides additional benefits in the front.

The TzekHaar Front features the fourth and final assault on the cathedral in Senntisten, where united forces of young gods keep the eggs of the Elder Gods from hatching and destroying Gielinor in the process. The attack to the north of the cathedral is led by TzKal-Zuk and his army of the TzekHaar[1][2] and is performed through the sewers of Senntisten.

For the duration of the first week after release, Jagex instated a Free death week.

The TzekHaar Front is located in the northern section of Senntisten, which can be accessed by the ancient door north of the Archaeology Guild and directly east of Tolna's rift. In the middle of the front there is a large chasm with chains enabling the player to climb down to Senntisten sewers. Interacting with the chains for the first time triggers a cutscene. 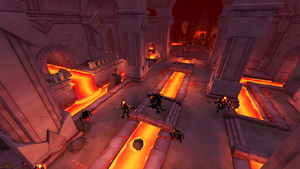 The TzekHaar front is located in the northern section of Senntisten and south of the main entrance, however most of its features are located in the Senntisten sewers accessed by interacting with a chain or the chains in the chasm in the middle of the area. The sewers contain a general combat area, inhabited by a number of TzekHaar-Hur, TzekHaar-Mej, TzekHaar-Xil, and TzekHaar-Kih. Monsters in the area are aggressive, unless the shard of Erebus is equipped. They have a similar drop table to those fought during the waves[3].

Six generals from the first God Wars Dungeon and the Heart of Gielinor found throughout the different fronts can aid in the fight against the TzekHaar outside the boss encounter by providing the player with temporary abilities: 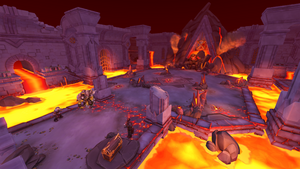 TzKal-Zuk watching over his arena

TzKal-Zuk is the general of the TzekHaar Front. Before players can fight him, they must fight off against 17 waves of TzekHaar enemies, much like in the TzHaar Fight Cave and Fight Kiln. There are checkpoints at specific waves that allow the player to restart from that stage if they die or teleport during the fight. However setting a kill time or obtaining the igneous stone requires the player to complete the entire encounter without taking advantage of checkpoints. This, along with the completion of TzKal-Zuk's challenges, is also required to complete the Make Way, I'm Coming Through achievement, which unlocks the hard mode. In hard mode, there is only one checkpoint, just before TzKal-Zuk.[1][2]

TzekHaar variants of TzTok-Jad and Har-Aken are encountered in the waves. These count towards Soul Reaper tasks and rewards. Likewise, the TzekHaar variant of Har-Aken can drop the volcanic shard that unlocks Shrimpy.[1][2]

The enemies killed during the waves before the boss itself also provide loot, which is placed in a chest and can be claimed even if the player dies or leaves. Unlike its spiritual predecessors, this encounter is not safe.[1][2] The waves start by right clicking TzKal-Zuk and choosing "Challenge". The encounter uses the Extra action button.[2] 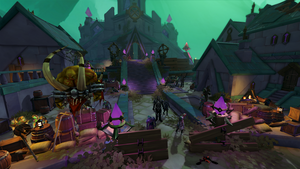 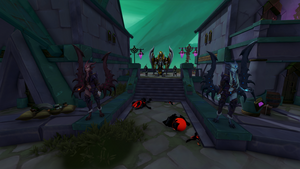 Throughout the TzekHaar Front a number of allied NPCs can be found, providing additional narrative background.

Furthermore, in Senntisten sewers the following NPCs can be found:

The fourth front of the Elder God Wars Dungeon was first teased on 15 October 2021 with a short animated teaser titled A challenge, featuring TzKal-Zuk saying You will fail like all the others! You were expecting the TokHaar? while its name was being chanted in the background. The teaser was accompanied by a message Are you worthy?[9] TzKal-Zuk is the leader of a feral TzHaar faction and a boss originally created for Old School RuneScape's Inferno, a spiritual successor to TzHaar Fight Cave and one of the hardest combat challenges in the game and is a first major element created for Old School to be added to RuneScape. A newspost published on 18 October announced that the front will be revealed the next day during a livestream featuring an artwork from artist Enkoro. The stream featured a trailer of the front, revealing its name and release date.[10] During the stream the developers showcased the front, including the cutscene, and discussed the development, mechanics and rewards.[2] The informations from the stream were also published in a newspost on the same day.[1]

The gods' dialogue in the cathedral released on 18 September, Seren noted the absence of the TokHaar in Senntisten and that Ful, watching their defeat in the Battle of the Monolith, will send more than the TokHaar this time. She also felt "a disturbance - a thrumming, deep within Gielinor's core", referencing the incoming forces.[11] She also agreed to Zamorak's suggestion to use necromancy to aid the defences and asked him to summon his necromancers, teasing the defending forces of this front.[12][13]