Slayer helmet
This boss counts as a slayer task for 'volcanic creatures'. The slayer helmet provides additional damage and accuracy if you are on task.

Completing the Fight Caves involves fighting through 62 waves of progressively more difficult combinations of monster spawns before taking on the final boss, Tz-Tok Jad. If the player tries to log out in the cave, the game will log them out at the end of the ongoing wave. Attempting to log out a second time will log the player immediately, but the player will have to repeat the interrupted wave.

The current wave that the player is on is shown at the beginning of each wave. Each waves contain different combinations of 6 types of monster. The number and difficulty of the monsters encountered will increase as the waves progress. 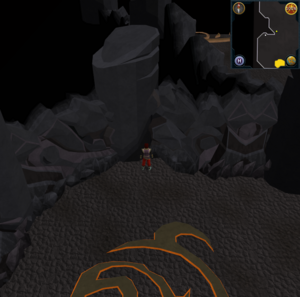 Monsters are easily trapped with this spot.

During the waves you should aim to conserve supplies as much as possible. Prioritise killing the monsters in this order: Tz-Kih (22) > Tok-Xil (90) > Ket-Zek (360) > Yt-MejKot (180) > Tz-Kek (45). Players with high levels and setups should be able to pass through the waves while taking minimal damage but lower level players may need use protection prayers as attacks become more frequent and intense.

There are several spawn points that monsters can appear from and there are also some safespots. Lower level players may wish to use to use the safespot under the crook of the projecting west wall in the south-west part of the cave at the start of each wave. Any monsters that do not spawn to the south will be lured onto the rock where they cannot attack you. 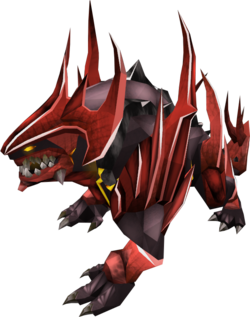 After the 62nd wave prepare for the final fight with TzTok-Jad. You will need to pay careful attention to the movements that indicate which attack he is about to use and quickly switch protection prayers accordingly.

TzTok-Jad has a maximum hit of 8000, however this is negated to 1 if the player uses the correct Protection Prayer to defend against his attacks. It is recommended to keep your health high if you are inexperienced in case of any mistakes. It is also recommended that you attack Jad from a distance so that he only uses his Ranged and Magic attacks. Jad usually opens the fight with a Ranged attack, so having Protect from Ranged on before the final wave starts is advised. 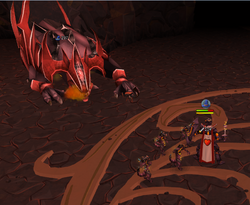 When the wave starts, it is recommended that the player has auto-retaliate on, so that they will be drawn to him if he spawned out of sight, and the Protect from Missiles prayer activated, since that's his most common starting attack. It is recommended to use Barricade or Resonance if Jad spawns out of sight and you are using a shield, as it will negate damage long enough for you to find him. It is not recommended to engage TzTok-Jad using melee, since TzTok-Jad will use all three types of combat to engage the player, and it is a lot easier to protect against two combat types than three. Therefore, a combination of Ranged/Magic attacks and Prayer switching is usually preferred. TzTok-Jad can deal over 7150 life points in one hit so unless you have over 7250 life points, you can potentially be one-hit if one of Jad's attacks hit you. Most players use Saradomin brews in conjunction with Restore potions or Overloads to boost their life points above their maximum normal life points, to reduce the chance of dying from Jad's attacks if something goes wrong.