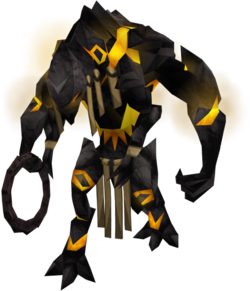 TzHaar-Xil (Hardened) is a monster fought during The Elder Kiln. They attack with ranged and melee. They are veterans of the Fight Pits, and much stronger than regular TzHaar-Xil. Inside the Pits they will attack either the player spoofs fighting at that time, or Ga'al-Jeh. They will not attack players unless attacked first.

Unlike regular TzHaar-Xil, these cannot detect prayer. It appears that they always attack with ranged with the first few hits, permanently switching to melee after that. Therefore, players are advised to use Protect/Deflect Missiles for the TzHaar-Xil's first few hits, then melee them with Protect/Deflect Melee on when it switches to melee. Do not attempt to range, mage or halberd these from a distance unless you are praying ranged, as they will switch back to ranged if they cannot reach the player while under attack. It is not advisable to "tank" their ranged attack as it has a very high max hit as well as high accuracy. Their melee attacks hits less and is less accurate, but still dangerous. Their melee and ranged attacks have a very similar animation in close range, so players should run away from them briefly to check if they have switched to melee before switching prayers. If they have switched to melee they would follow the player.

It should be noted that the attack style resets to ranged if the TzHaar-Xil attacks Ga'al-Jeh or retaliates against the player's summoning familiar. Also, the familiar cannot have any items in their inventory. Therefore, a weak combat familiar such as the spirit terrorbird would be more hindrance than help. A non-aggressive familiar, such as a Unicorn stallion, is recommended. Player with high melee defence and some good food could simple pray against their ranged attack while using a powerful combat familiar like a steel titan. Either way, being attacked by two of them at once is extremely dangerous as without the right prayer the pair could kill most players in one hit. Keep in mind that their attacks hit the hardest among all enemies in the Pits.

However, they have fairly low defence, and should not be too difficult to kill as long as you pray correctly.

Good melee armour is advised for a better chance to survive a misclick or prayer points running out.

Currently, one of the two TzHaar-Xil (Hardened) is not affected by the Ring of recoil. However, the ring could damage the other one. This is likely a glitch.