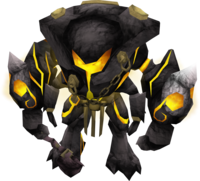 TzHaar-Ket-Yit'tal is the champion of the Fight Pits, and one of the monsters to be fought in the Fight Pits fight during The Elder Kiln. Once the player has saved Ga'al-Jeh from the first wave of player spoofs and TzHaar, TzHaar-Mej-Ak calls TzHaar-Ket-Yit'tal into the fight to destroy Ga'al-Jeh, to try and restore TzHaar-Mej-Jeh to a state of mind that would focus more on the TzHaar society on a whole, rather than just focusing on Ga'al-Jeh, who was the offspring of TzHaar-Meh-Jeh, despite his protests.

TzHaar-Ket-Yit'tal has an extremely high defence against ranged attacks. A dragon halberd or crystal halberd would be far more effective. The optimal way to kill it is to use a halberd or magic spells and trap him behind the pillar in the center of room. He will not retreat and cannot use any attack, since he only uses melee, which results in a very easy target. He can be fought with close range though, protect from melee prayer or deflect melee Curse will still make him easy to defeat.

If not, he may pose more of a challenge as he can hit into the 300's, despite being rather inaccurate. He will occasionally drain 150 prayer points when he strikes, so players should be sure to watch their prayer carefully. It appears that he drains prayer randomly, whether protect from melee is activated or not.