From the RuneScape Wiki, the wiki for all things RuneScape
Jump to: navigation, search
The Old School RuneScape Wiki also has an article on: osrsw:Tzhaar-ket-om
For the quest item, see Obsidian maul.
Not to be confused with TzHaar-Ket-Em.
TzHaar-Ket-Om? (edit)

The TzHaar-Ket-Om (also known as the Obsidian maul) is one of the few mauls in RuneScape, excluding the ones found whilst dungeoneering. Players can buy the TzHaar-Ket-Om at the weapons store in the TzHaar City for 75,000 Tokkul, and it can be obtained as a rare drop from TzHaar-Ket. This weapon cannot be made using the Smithing Skill. Players must have level 60 Strength to wield this weapon.

It is affected by the Berserker necklace, receiving a 5% damage increase when the necklace is worn.

The TzHaar-Ket-Om has stats equal to similar two-handed tier 60 weapons such as the Dragon 2h sword, Dragon halberd and Dragon spear and is cheaper than they are. This makes it an attractive choice for players who have neither the money nor quest requirements for the Dragon two-handed weapons. 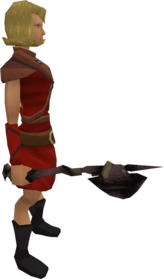 The update history project is a work-in-progress – not all updates to this topic may be covered below. See here for how to help out!
Retrieved from ‘https://runescape.wiki/w/TzHaar-Ket-Om?oldid=34406482’
Categories:
Hidden categories: