From the RuneScape Wiki, the wiki for all things RuneScape
Jump to navigation Jump to search
TzHaar-Ga'al-KotGa'al? (edit) 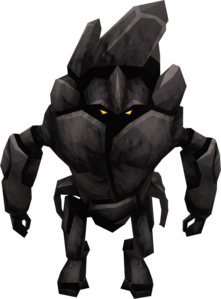 TzHaar-Ga'al-Kot is a Ga'al explorer and main character of the Wandering Ga'al miniquest who decided to travel the world after the Ga'al were integrated into TzHaar society after a plot by the TokHaar to drive the TzHaar to extinction was thwarted. TzHaar-Ga'al-Kot travelled the world, passing places such as Lumbridge, where it baked a cake, and the Dominion Tower, where it defeated a TokTz-Ket-Dill.

In the Dominion Tower, after watching the magic of a human mage, he combined it with knowledge taught to him by the TzHaar-Mej and taught himself an invisibility spell to help him avoid being noticed. The spell turned sour, however, as the magic was too strong; it found itself unable to "unhide". He can be encountered by adventurers after completing The Brink of Extinction by performing some special actions, which help him "unhide".

After encountering him, you can bring him back to the bookcase in the Fight Cauldron, and he will translate it, revealing some lore on the Elder Gods, including Jas and Ful. He is notable for taking the longest amount of time for any piece of content in the game to be found, as he was released on 3 January 2013, but was only found 4 months later on 14 May.