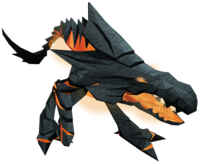 Tz-Kil are especially powerful lava monsters fought during The Brink of Extinction. They attack with magic, and can be more dangerous than their combat level suggests as they as multiple spawns appear with their accurate magic attack.

It is recommended to take advantage of their weakness to bolts, and try and separate them so only a few are attacking you at a time. Alternatively, AoE abilities work well due to their relatively low life points.