From the RuneScape Wiki, the wiki for all things RuneScape
Jump to navigation Jump to search
This article is about the player-made mask. For the Treasure Hunter-related item, see Mask of the Airut.
Item JSON: {"edible":"no","disassembly":"no","stackable":"no","stacksinbank":"no","death":"always","name":"Tuska mask","bankable":"yes","gemw":false,"equipable":"yes","members":"yes","id":"30226","release_date":"3 December 2013","release_update_post":"Harbingers of Tuska","lendable":"no","destroy":"Drop","highalch":false,"weight":0.5,"lowalch":false,"tradeable":"no","examine":"A handmade mask in the image of Tuska. This can be given to a Slayer master for some Slayer points.","noteable":"no"} 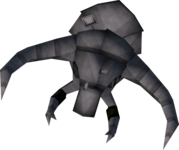 The Tuska mask is a cosmetic head item that is made by combining five drops from airut Slayer tasks:

It is possible to get more than one of each part, and the pieces stack in the player's inventory. You may end up with several lower tusks and need a top, for instance.

However, the mask pieces drop only while on an airut task.

The mask pieces can be traded for other mask pieces with other players. After being put together for the first time, the player can wear the mask to gain 43,680 experience in Attack, Strength, Defence, Constitution, Ranged, Magic or 10,920 experience in Slayer. Gaining any experience requires the player to be at least level 90 in the desired skill. The mask can then be kept as a wearable souvenir, or can be traded with any slayer master for 20 slayer reward points by using the mask on the slayer master. The experience bonus is given only one time; however, any masks built after that can still be traded to slayer masters for the 20 slayer reward points.

Constructing the Tuska mask is a requirement for the completionist cape.