From the RuneScape Wiki, the wiki for all things RuneScape
< Turoth
Jump to: navigation, search 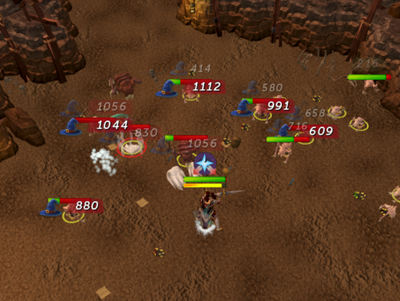 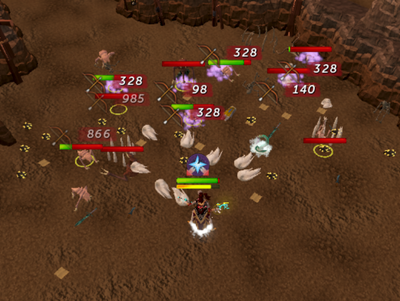 Using Magic will grant the highest possible Farming experience rates from Turoths, which can exceed 200,000 experience per hour. This is due to Magic having many Multitarget and AoE abilities.

Do note that the Staff of darkness is only minimally better than the Staff of light, but at a higher cost to use.

Having the Spirit cape unlocked is handy if using the Smoke devil familiar, but the cape does not need to be worn to benefit from its effect.

A suggested ability bar is shown below, and uses the Revolution++ mode. The Corruption Blast ability can deal huge amounts of damage, and is highly recommended to have unlocked. The Caroming perk increases the number of possible targets of the Chain ability, also increasing the overall damage output and therefore the Farming experience gain.

A suggested ability bar is shown below, and uses the Revolution++ mode. The Corruption Shot ability can deal huge amounts of damage, and is highly recommended to have unlocked. The Caroming perk increases the number of possible targets of the Ricochet ability, also increasing the overall damage output and therefore the Farming experience gain.

Turoths are an excellent source of Farming experience if killed in high quantities. The Fremennik Slayer Dungeon contains a high number of Turoth spawns, and it is the recommended location for using this method. Slayer level 55 is required to kill them, but the above requirements are needed to achieve the desired high efficiency. They can be damaged with only select weaponry, listed in the Strategy section of their article.

Using ranged weapons, such as the recommended Ascension bows, provides a high damage output and is the second best style to use at Turoths. Cinderbane gloves apply a poison to the damaged Turoths, and can kill stray low HP Turoths. A summoned devil familiar is also able to damage Turoths and use their special attack Dust cloud to cause Area of Effect magic damage to multiple targets. Using a Spirit cape is recommended, since it reduces the Special move point cost from 6 to 4 and allows the special attack to be cast more frequently. The auto-fire rate of the special attack should be set to 1 by right clicking the Summoning points bar in the familiar interface.

The Bonecrusher and a Twisted bird skull necklace necklace provide unlimited prayer point maintenance, allowing the non-stop use of Soul Split to maintain Life points, and the use of Anguish and Desolation curses to further increase the damage output. Berserker curse can also be used to prolong the stat boosts of a Dominion marker, and the Dominion medallion can be occasionally equipped and then unequipped to remove the existing stat boosts to allow the marker to refresh them back.

Aggression flasks or Aggroverloads allow you to stay in combat and keep killing Turoths without paying any attention, and you may bring Super restore flasks to restore Summoning points to renew the smoke devil familiar.

Level 74 Farming is required to be able to get any high experience gains with the Seedicide while killing Turoths. The Spring cleaner (along with the Advanced gold accumulator) are required to break even or make profit. The Charming imp is handy for collecting the charm drops or converting them for Summoning experience, and the Herbicide can also clean the drops by destroying herb drops and awarding minor Herblore experience.

The weapons should have the perks Precise 4 or 3 and Equilibrium 2 in one gizmo, and Caroming 3 perk on another, and the armour is recommended to have various useful perks such as Scavenging 3 or 4, Biting 2 or 3, and Crackling 3.

This method allows Turoths to be killed at the rate of 1,500 kills per hour at minimum, with 1750 being an easily achievable average. Each Turoth awards approximately 91 Farming experience per kill on average. With optimal setups the average number of kills per hour can be pulled up to the range of 1800-1900, and even above that; 1900-1970 seems maintainable while wearing a Farmer's hat and Farmer's boots, resulting in at least 175,000 experience per hour. The only actions required while using the method is gearing up, getting to the location, activating the curses, renewing the aggression potion's effect and the summoned devil's timer, and loading the familiar with more scrolls.