Tuai Leit (pronounced "Twilight") is an island in The Arc region of the Wushanko Isles, known for its bamboo. If a westerner has met a seasinger, soothsayer, or siren, it was likely here; it is a minor centre of study and research for those not enamoured of the civilised east. 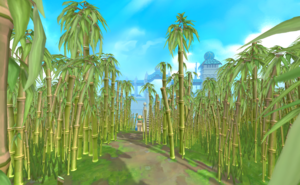 The main settlement on the island hidden amongst bamboo.

There is a berry planter on the island, in the square with the bank in it. There is enough space for two berry seeds to be planted side by side in it, which can result in cross pollination, giving a new type of berry seed, which can then be planted in the planter itself (exact chance is unknown, may even be an absolute chance). It also gives a decent amount of berries and seeds of the original type planted there.

The farming area is the first section of the gnome colony players will enter, and is home to ten rumberry bushes that players can harvest for rumberries and rumberry seeds. Players harvesting berries may occasionally spot a Pumpkin Limpkin flying in to wander and forage.

There are two sources of bamboo players can chop directly west of the Farming area.

There are two bakami respawns on the island for hunters. One near the gnome settlement, can stray along the beach and up the trail towards the school. The other is often in the school or along the supply area.

Big Bada Bamboo is a shop run by Alder (bamboo merchant), where players may buy and sell bamboo for chimes.

Spirited Away is a shop run by Sensei Seaworth, where players may buy and sell kami for chimes.

Ani's Seed Store by the Sea Shore is a shop run by Ani (farming merchant), where players may buy and sell berry seeds for chimes.

Terri's Merry Berry Bar is a shop run by Terri (fruit merchant), where players may buy and sell berries for chimes.